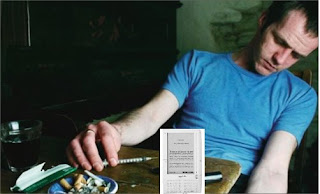 I admit I’ve been protesting too much concerning the Amazon Kindle e-reader. My rebuffs and insults (i.e. “it's a Faberge egg”) were half-hearted attempts to stiff-arm overwhelming feelings. This post is part of my Twelve Step program (i.e. "I admit I am powerless over my addiction to Kindle..."). The awful truth is once you go Kindle, you never go back: I can no more imagine returning the replacement in these waning days of the 30-day return period than I can imagine returning a cold Beck’s Dark on a Friday night. My wife can well attest my addiction by my maniacal strategies to protect it from harm. (Think fire-proof steel.)

There’s little to say other than that little device is like crack cocaine and my urgent advice is to avoid it like the plague. (Don’t start with Starbucks coffee either – I think they put something addictive in it.) The Kindle is the closest thing I’ve seen to the “ultimate entertainment” depicted in David Foster Wallace’s novel “Infinite Jest”. Downright scary. I think the pivotal moment came last week just before it broke - God’s none-too-subtle way of explaining to me the foreign concept of ‘detachment’ - when I downloaded the Complete Works of GK Chesterton for $4. Searchable, no less! This felt utterly magical; it was something of a long-felt dream to have the complete works of Chesterton in my library. I immediately searched for Shakespeare and was able to read everything Chesterton said about the Bard.

The whiff of danger expressed concerning the Kindle was mirrored by no less than Ham of Bone, who surprised me yet again. In Wall Street parlance, a high beta stock is one with the capacity to surprise. Ham, even after knowing him all these years, still has a high beta. He objected to Kindle not on expense grounds (he is to frugality what Audubon was to painting birds), but for a more obscure and metaphysical reason. Ham said he recoils at the thought of having his whole reading life mapped out before him. I’m not sure I fully understand what he meant; perhaps it was merely that it would remind him of his mortality too much, as if you had in front of you every beer you’d ever drink and were saddened by knowing it was finite. Given Bone’s frugality he would feel constrained to never buy another physical book but I have no such compunction.

Ham said this will lead to the scenario played out in a sci-fi book he read in which chips were embedded into human brains giving access to Wikipedia such that if we’re on a sinking boat we can get instructions to save our life in real-time. Something like that, I may be mischaracterizing it. I told him that personally I’m not too fond of physical invasions, which is why I’ve successfully avoided laser eye surgery all these years despite everybody and their brother having had it done.

If the Kindle made available only the complete works of Chesterton and Shakespeare I’m tempted to think it would be worth it. Poetry, plays, fiction, memoir, apologetic, biography, literary criticism..the sheer literary biodiversity spun off by those two is stunning. I read, transfixed, sonnets before and after number 63, where I landed by chance. As one Kindle forum member said, Kindle inspires you to read more.

The Kindle forums themselves are a wonder to behold. It's a sad commentary illustrating the drug-like effect of Kindle. The 900+ discussions seem indicative of the logophilliac diarrhea of the new convert. Full disclosure demands that I admit that I, of course, chimed in.

The truth is I thought I was immune to Kindle because I've always been addicted to physicality of books. (I sent Jonah Goldberg an email praising the smell of his book, for heaven's sake.) But I find that even more addicting than the font and glue and paper and binding are the words and ideas, especially words I would not otherwise have fully usable access to (such as Chesterton's complete works).
Posted by TS at 11:00 PM