Called to a Greater Election 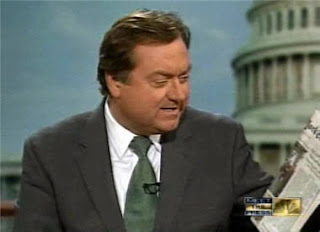 Despite the constant evidence that life on earth is fragile and momentary, it's still shocking that Tim Russert died. Those are words I never expected to hear - at least not now in the middle of a big election - and yet so often death reveals a failure of imagination. This is not the storybook finish we'd anticipated for such a happy journalistic warrior. Something like this ought happen after the presidential election year given how much he relished them, just as the baseball star Roberto Clemente died only after his 3,000th hit. On the other hand perhaps it's fitting that his death remind everyone that there are things far more important than presidential elections.

Eminently likeable with that great toothy grin, he was in his element when surrounded by pundits on Sunday mornings. It's hard to believe that the Meet the Press I have on tape from last week will be the last one. For me, Meet the Press and Tim Russert are as inseparable as Johnny Carson was from The Tonight Show.

Ohio blogger Rich Leonardi mentions an encounter between Russert and his father:

Ten or so years ago, my late father happened to be seated next to Tim Russert on a flight for a business trip. They talked for an hour about a range of topics: politics ('natch), family, life on the road, growing up in western New York. It must have been an interesting conversation. My father was non-ideological but temperamentally conservative; Russert was ideological but curious and fair.

Though born and bred a Democrat, he was about as fair as one could hope for. His respect for history, as shown by his airing flashbacks from Meet the Press from forty to sixty years ago, is something that is increasingly rare. Combining toughness with great humanity, ten years from now we'll look back and he'll look like a quite a friend to conservatives by comparison to what we'll have then.

His mantra during the last election was "Ohio, Ohio, Ohio!", but what I'll remember most about him was how thrilled he was at meeting Pope John Paul II and having his son blessed by him.
Posted by TS at 11:22 PM