It was a dark and stormy evening (not really, but it adds to the suspense). Actually it was sunny and 8 pm and I was jealous at my wife's sleeping ability. There she was on the couch, blissfully unaware of an annoyingly high-pitched alarm going off in the basement. Something sump-pump related, surely, as we'd just gotten torential rains. (Later I watched O'Reilly and the weather guy says we're heading for the cyclical change in weather unrelated to global warming - cue "Bad Moon Arisin'").

I get down there and water is gushing in the basement window like a Harvey Wallbanger (don't know what that means, just liked the sound of it. I'm terrible with analogies.)

Ye ol' sump pump was workin' over time without avail. Like bailin' the Titanic. The pump is successfully pumping the water outside, but the outside ain't helping as apparently the line to the sewer was clogged up.

I rouse my wife. She finds the "snake", a long coiled wire that you use to unclog drains, something I am well familiar with from my days as a toilet warrior, as the Darwins may recall.

This time it's an outside line and I can't say I'm surprised that it didn't work. The whole length of that snake went in without visible effect.

Fortunately my wife thought of a creative interim solution by turning off the sump pump and using a spare pump with a long hose - we threaded it through the basement window and pumped the water farther away from the house. Then she found more long hose that she'd thought she'd returned to the store - it was the wrong size or something - and by attaching it to the spare pump hose we were able to get the water to the point where it would roll downhill, to the sewer. Procastination in the form of not returning something can be your friend.

So that was our excitement last night. I'm about ready for a Harvey Wallbanger.

* * *
This just in: I find fatigue very fatiguing. 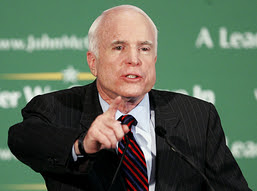 McCain's awful green backdrop reminds me fondly of the first car I drove. It was a Chevy Chevette, aka the "pea green penis machine". But I digress...

The backdrop is so bad that McCain should use it to his favor. It could be a brilliant anti-Obama marketing ploy - McCain should be INTENTIONALLY post-modern as a response to Obama's slickness. Think of it as the equivalent to the homeowner who puts out pink flamingos purely as irony.

Now admittedly the only way you can tell between irony and non-irony is announcing it*, so McCain has to point to the backdrop and say something like, "this is the kickoff of my anti-marketing routine. With my opponent you'll get slickness without substance, with me you'll get substance without slickness." Only they should add a few retro figures on the backdrop, the kind Smock loves. Sheesh I ought to send this to the McCain election campaign, all three of them.

* - Flannery O’Connor wrote that she would name her dog 'Spot’ as irony, her mother would w/out irony. FO said she figured it didn't matter much in the end.
* * *

Peggy Noonan is to columnists what -- oh, there I go, walking into an analogy I can't finish. Feel free to supply your own. She's certainly my favorite columnist such that there is no second. It's amazing how consistently interesting she is. Her latest well describes the difference between the old and the new America (I wish I was more firmly old America):

In the Old America, love of country was natural. You breathed it in. You either loved it or knew you should.

In the New America, love of country is a decision. It's one you make after weighing the pros and cons. What you breathe in is skepticism and a heightened appreciation of the global view.

The Old America had big families. You married and had children. Life happened to you. You didn't decide, it decided. Now it's all on you. Old America, when life didn't work out: "Luck of the draw!" New America when life doesn't work: "I made bad choices!" Old America: "I had faith, and trust." New America: "You had limited autonomy!"

Mr. McCain is the old world of concepts like "personal honor," of a manliness that was a style of being, of an attachment to the fact of higher principles.

Mr. Obama is the new world, which is marked in part by doubt as to the excellence of the old. It prizes ambivalence as proof of thoughtfulness, as evidence of a textured seriousness.

Both Old and New America honor sacrifice, but in the Old America it was more essential, more needed for survival both personally (don't buy today, save for tomorrow) and in larger ways.

The Old and New define sacrifice differently. An Old America opinion: Abjuring a life as a corporate lawyer and choosing instead community organizing, a job that does not pay you in money but will, if you have political ambitions, provide a base and help you win office, is not precisely a sacrifice. Political office will pay you in power and fame, which will be followed in time by money (see Clinton, Bill). This has more to do with timing than sacrifice. In fact, it's less a sacrifice than a strategy.

A New America answer: He didn't become a rich lawyer like everyone else—and that was a sacrifice! Old America: Five years in a cage—that's a sacrifice!

* * *
A "hodge-podge" post seems the proper place to complain about something that concerns no one outside Central Ohio but... Once upon a time we had a local classical radio station (we also once had a symphony, but that's a whole nudder story). And this local radio station, 89.7 on our dial, decided to put air National Propaganda Radio during drive time despite the presence of the exact same NPR news on 90.5, a few flicks to the right. You can't make it up.

I've decided to suspend all the contributions I've never made* until this outrage is rectified and Mozart is returned to the airwaves. (Road rage incidents up 20% since this introduction - related?)

* - partially due to fear that if I contribute $25 I figure I'll be saddled with a metric ton of junk mail from liberal organizations.

* * *
Still Vain But... Hidden in the crevice of a bookshelf, I see that “Hollywood Best Writer” award statue. I hadn’t seen that in years; I’d forgotten about it and it melted a part of the past and made it newly accessible. How I longed then for the vanity of a byline! The point was to get published as if there were more merit in that than in having something meaningful to say. In fact, what I wrote was completely irrelevant; it was all about acquiring the souvenir of my name under a heading. I wonder now if the two aren’t mutually exclusive, that you can’t say anything meaningful if the byline is the point.

* * *
I liked this post from Terrence Berres as it's both funny and meaningful (hit the link to get the full benefit), which is a rare combination:

Archbishop Timothy M. Dolan in the "Herald of Hope" column in "our" Milwaukee Catholic Herald, May 29, 2008, takes his theme from the previous Sunday's "feast of Corpus Christi, the Body and Blood of Our Lord". He celebrated at rural St. Lawrence Church with a Mass and procession.

We processed through the parish cemetery, and even the cows in the adjacent pasture sensed something unique.

The uncaused cows, for you Thomists. Our Archbishop takes an apparent detour from his theme.

Last week, as you know, I was in Ethiopia with a delegation to celebrate 50 years of efforts by Catholic Relief Services in that aching country of East Africa.

The highlight was a visit to the center in the poorest area of Addis Ababa served by the Missionaries of Charity of Blessed Mother Theresa. When Missionary of Charity Sr. Benedicta, called to invite us, I told her I was eager to visit their kitchen which served 6,000 hungry a day, their orphanage where they cared for babies with HIV/AIDS, their center for the dying, their nursery preparing abandoned infants for adoption, and their dispensary for the sick, one of the only ones in that teeming metropolis.

I say apparent detour because,

"Oh good," Sister replied. "But we are more eager to have you celebrate Mass with us."
Uncharacteristically, I was speechless.