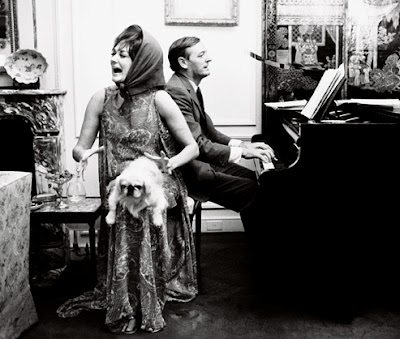 Oh what a fascinating family! The Buckleys are to me what the Kennedys are to the public at large. I can hardly wait to read Christopher Buckley's memoir, due out next spring. I'd like to learn more about Pat. What a fighter! What a mixture of paradox! Earth mother, nurturer who was to the right of Bill politically. She who, even when she wasn't speaking to Bill, would pack lavish lunches for him. This Manhattan socialite, hobnobber with the rich and famous, believed foremost in taking care of her man. And a bit of him died with her - how copious were his tears at her passing.

Pat in later life dismissed and maybe loathed the New York years. One-by-one her earthly delights were taken away, especially in the form of the people she outlived. Priests and nuns live longer than lay people. Could it be because they are less subject to losing their will to live because they are attached to the spiritual, delights which do not pass away?

Can it be that it was all so simple then?
Or has time re-written every line?
If we had the chance to do it all again
Tell me, would we? could we?

Is she throwing that dog?

Yep looks like it. Or at least dropping it.

A few years ago I ran into a Jesuit priest who had been a teacher at my high school. When I commented that he hadn't aged much in the decades since, he replied "I've never been married and I've never filled out a tax return."

you know, i shoulda included mr. buckley in my "sexy legends" post, but i didn't think about it. blasted!

thanks for being smarter 'n me and sharing this post. i never knew his wife was so splendid.

Great line from that Jesuit pries. Reminds me of what my dad says about the fact that women are dying younger than they used to - he attributes it to their entering the workforce.

Don't feel bad Smock, I forgot a lot of folks on my "Most Fascinating Catholics of '09" list.