At last we have our generation's Updike, a chronicler of "Wacky Packages" (circa 1973) and one of the fellow survivors of the last generation of children who had time and adventure on their hot little hands - back in the age before structure and organized sports took all the fun away. "Kids are natural cartographers," he writes, and I recall the interior map of my childhood neighborhood at the intersection of Sando (a name that would fit well on the Flintstones and thus lent it a positive air) and Fairfield, which bordered the Elysian river and its frank smell of creek bed which wove into our hearts a love for nature. 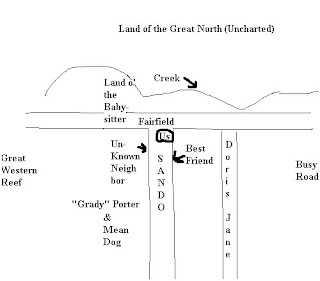 I can see the map in front of me - the limits of the known world at half-mile increments in most directions, though truncated in some by busy roads which were parentally ruled out as hostile territory, Injun territory. Our house sat next to a neighbor with a prominent gut who wore white t-shirts with holes and whom you suspected would be at home with a 40-ouncer, and next to him was the opposite, tony WASP-ish Protestants who made their own wine and soon fled the neighborhood for wealthier climes. But distinctions between adults only become noticeable with age - back then they were all lumped into the large category of "tall people with jobs".

Directly across the street was "the unknown neighbor" and down from him was Gary Porter which we mispronounced as "Grady Porter" since that name seemed to fit better; it had more heft and gravity for there was something slightly sinister about him and his house. Mostly it was their mean dog who struck fear in the hearts of all the neighborhood children and whom I had the pleasure - oh the sheer joy of it! - of outrunning once when it was loose. But it scared the hell out of me.

The civilized world consisted of two parallel streets as well as fragments of where the streets intersected with others. Two blocks, but two blocks that contained infinite wonders, especially at Halloween when all houses became figures of great interest, and at Christmas when many non-Scrooges lit up their houses in generous displays. The bourgeois put up a string of lights; the bohemians put pedal to the metal.

In Chabon's book, his father sounds familiar: "Some people, one imagines, may be naturally buoyant of heart, but with him, good spirits seemed, far more admirably, to be the product of a strict program of self-improvement in his youth - he believed, like most truly modest men, in the absolute virtue of self-improvement."

Even of his marriage, and the desire for rootedness resonates with me given how closely I identified with my best friend's German-American parents: "God, it was a seductive thing to a deracinated, assimilated, uncertain, wandering young Jew...". Or to a deracinated, assimilated, uncertain, wandering young Catholic. I chose German as my high school language of choice because of my familiarity with my friend's upbringing, not even realizing until years later that my own family is of half-German heritage.

Of our generation he writes how we are "supposedly cynical, wised-up, skeptical" and I have to admit that surely was why Letterman was such a cult hero back in the early '80s, back when he was anti-establishment and cynically cool. (The older I get the more I realize how much more a creature of the culture I really am despite my adolescent delusions of individual grandeur.) I wasn't into MAD magazine much, other than the fun of folding the back cover to reveal what lay hidden which you could do in the store for free. I hadn't the money it seems now.

I hadn't realized how far back that sort of cynicism of advertising went, that even as early as '73 there were peel-off stickers that mocked the appearance and name of some well-known brand of household product. "A bottle of fetid-looking salad dressing labeled Fish-Bone, a Bustedfinger candy bar with a big swollen finger poking through...". There was something almost Gothic about it which was appealing in a Halloweenish sort of way. I don't know that at the time I considered it mocking products and advertisements so much; to me "Dial soap" was still revered for its 99% effectiveness at banishing germs, if you cared about banishing germs, and I don't think "Vile soap" hurt the branding. But to this day I recall a classmate who'd made a gross rhyme to the words of the "Our Father"and I was appalled: "was nothing sacred?" I wondered, literally.

Chabon writes about marriages and calls himself a "close observer of other people's marriages":

"I have noticed that in nearly all the longest-lived ones, if there is space enough in the house, each partner will have a room to flee to. If, however, there is only one room to spare, it will always be the husband's."

Man caves we will always have with us. Not exactly something you'd find in Theology of the Body 'eh?
Posted by TS at 9:21 PM

*But distinctions between adults only become noticeable with age - back then they were all lumped into the large category of "tall people with jobs".*

On the husband being the one to get a room if only one is to spare . . .

Or perhaps this isn't an either/or situation, and the "man-cave" will always have that comfortable "throne"?

I can vouch that there's always a favorite chair in a man's favorite room.