Title comes from the title of an email from an acquaintance in KY, who writes:

I'm still having trouble digesting it. I can't figure it out, perhaps because I have a tendency to label people or states and MA is a blue state as has been pointed out ad nauseum. I was also a bit surprised to find the western part of the state more pro-Coakley than the eastern side. I figured all the elites were along the shoreline and the more rural denizens out west, but then my level of knowledge of MA politics is limited at best. Maybe it's as simple as recognizing Bay staters are more influenced by a candidate's charisma (Brown, Kennedy) than by reflexive ideology, although admittedly that makes Michael Dukakis & John Kerry perplexing.

On one level, given the string of Republican governors from Weld to Romney, I guess I shouldn't be surprised a Republican could win a Senate seat. But then too the margin of Coakley - up some 30 points in December - and the rate of decrease was just phenomenonal. I wonder what impact the 24/7 cable media has on races; the dynamic seems to be able to change in a hurry. Her free fall occurred not over months and not even so much over many weeks. The electorate turned, and turned in a hurry. 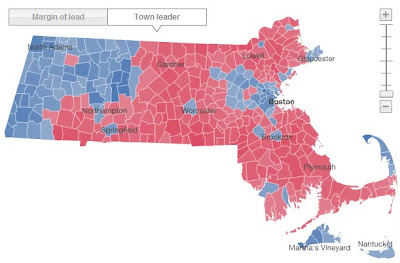 For the first time in eons I watched Keith Olbermann - simply for purposes of schadenfreude. "It's never over till the other team's cheerleaders are crying," said a friend in the '80s. Grim faces dominated the landscape there, and tiny leakages of humility were seen. I assume they were restrained from calling the voters idiots simply because some of the five people who watch MSNBC would be turned off by that sentiment.
Posted by TS at 12:12 PM

Western MA was traditionally a Republican stronghold-but no real power. Weld and Romney were not from the Western part of the state.

Note also that Repubs in MA-especially those in the east tend to be very liberal. I looked at Scott Brown's website, and he's no conservative.

Your surprise at Coakley's support in Western MA would be my surprise too. Of course I haven't lived there in 15 years.

The most conservative governor MA had in my lifetime, was a Democrat-Ed King.

Yeah it's always a mistake to substitute "conservative" for Republican, although someone like Ed King is now about as rare as junebugs in January. On the single issue of health care reform at least, it seems Brown is far to the right of Coakley.

I watched a little msnbc too. Quite pleasurable to watch people who think they've taken over the country wake to a rebellion. Chris Matthews was virtually tongue-tied (or perhaps I should say in babbling mode). He and that lesbian whose name I can't remember were slumped in their chairs overcome with grief. Thanks for watching Olberman for me. I just couldn't.

That was my once-a-decade Olbermann viewing. Chris Matthews looked hung over...