From the file "No Reason You Should Care But...": have switched my workout music from Ralph Stanley's bluegrass album to "The Tartan Terrors", an uptempo Scottish bagpipe band. Definitely increaseth the pulse. 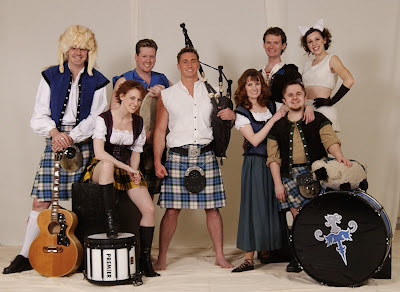 Not your father's piper band

* * *
Some men dream of man caves with cavernous (almost wrote carnivorous) televisions, I dream of the wondrous book-room where the books multiply like clematis vines...

* * *
I remember in high school hearing the scorn heaped upon alcohol by teachers and administrators for its property of making you talk louder and laugh more easily. "Indeed," I thought priggishly. I disliked those who talked too loud and were too easily amused. I was a natural-born teetotaler. But something happened on my way to the Abstinence League, and that was I was too fond of tradition. Both familial and societal. And in both alcohol extended as far as the eye could see. Two traditions butted heads: the tradition of personally not trying anything that led to lessened rational thinking and the tradition of doing what has been done by everyone from Churchill to Christ in the past. I accepted the latter as having more authority and so tried my first beer. And I noted it had certain positive qualities that might be useful at a later date.

That later date came soon enough. What I couldn't recognize as a haughty teenager is that laughter and loud talk would, in the future, not be quite so common. In high school it was the default position. Soft talk and a lack of humor were the odd man out then. But it would not be so forever.

Easy laughter is easily pilloried, but should it be? Is the world too full of laughter already? Then there's the law of inertia and how a lack of a sense of humor tends to extend itself and how it's contrary does the same...

* * *
So, didn't have the sort of breakout writing that I always hope for on Fridays. It's couintertuitive but I write to learn, to have those sudden small epiphanies. But on some Fridays all I think is: "wow, this beer is damn good!" But then inspiration is 99% perspiration and 1% alcohol, not the other way 'round.

* * *
Speaking of real epiphanies, at Mass Sunday realized that it was precisely that quality of God being in the commonplace - bread, a manger, my neighbor - that allows me the audacity (can one still use that word with a straight face post-'08 campaign?) of believing that I too, no account me, can be a temple of God. So, selfishly, I do very much like the whole God-is-found-in-unexpected-often-banal-places truth because it includes me!

* * *
God is not arbitrary, He's not a utilitarian. The hymn instructs: "Saints below, with hearts and voice, / Still in songs of praise rejoice / Learning here by faith and love, / Songs of praise to sing above." This life is learning the words to the Heavenly song. It's not meant to test or torture, but to sing, to love, to do acts of kindness, which function as the words in the hymnal in Heaven. From the Infant of Prague devotional, "Help me to follow the inspirations of Divine grace, which guide me to union with you." The purpose of the inspirations of grace is not utilitarian except in leading to greater union with God.

* * *
Read some of a Karen Harper novel, about Appalachia and the search for ginseng root. Pretty interesting. Then read long from Drood, a fictionalized account of the last years of Charles Dickens, followed by reading some of Jane Smiley's biography of the great author. The new Dickens biography is sorely tempting me. I don't know why I'm so fascinated by the life of Dickens, or what I can learn from it, but there you go. Instead I should be reading the lives of saints like...

* * *
Like Mother Teresa. Something very chastening about reading "Come Be My Light," Mother Teresa's letters. Very humbling. I'm not sure it's good for me to read about how God treats his friends, i.e. his saints. Reading the lives of saints, it's hard not to see suffering being to sanctity what weight is to sumo wrestlers. (Is that the first analogy between saints and sumo wrestlers ever? I hope so.) But what is inspiring in the book is that suffering is limited. It eventually ends. One of the sisters wrote that "[Mother] would say to me in difficult times, 'Don't give in to your feelings. God is permitting this.' This really taught me that the best and the worst in life would pass and if I will learn to accept the cross, to be quiet, humble and hopeful, that all will pass."
Posted by TS at 9:51 AM

I used to know a girl who worked out to Alicia Keyes. I never understood that.

My own experience has taught me that Spandau Ballet wrote better exercise music than Duran Duran.

I once scandalised some former students, who, about a year after graduation, invited me and some other old teachers to a party. Not realising I was being shocking--and having noted that most of them had turned eighteen and were legally allowed to drink--by asking when the cocktails would be served. (Perhaps it was also insulting to the hosts, but they weren't shocked by the bad manners, I know.)

Then I told them that my last two years in uni had conditioned me to believe that a party isn't a party until alcohol is served. I was just making conversation, but the little darlings were even more appalled.

Really? Spandau better than Duran squared? I've listened to "Hungry Like the Wolf" a few times and it seems to have made me run like... a wolf. Or so my delusions told me. But then I don't know a lot of Spandau Ballet songs with which to compare.

I put on Gold, a kind of Greatest Hits compilation (though it doesn't have the complete singles) and had a great workout. =)

Try Chant No. 1 or Instinction.

It's all in the bass, I think. John Taylor was always willing to be experimental; Martin Kemp is more conservative and steady. So I work out to Spandau now. =)