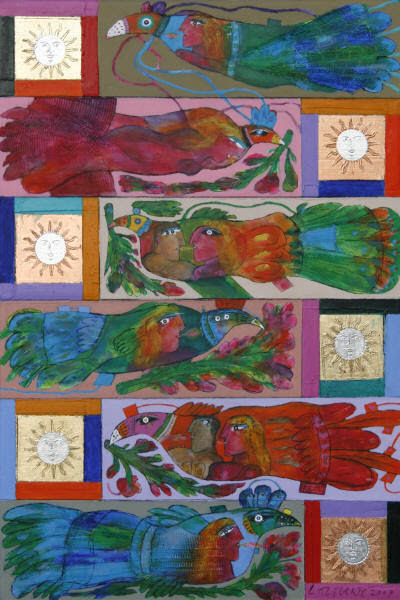 Something is afoot here, namely there's an unknown character around these parts: the sun. And a warm one. I'm really getting the sense that spring and summer aren't merely distant rumors. This new thing, this radical weather change, is coming.

Oh how cruelly fast days off go when the sun is out and I indulge a nap! Like Carl Lewis on speed. Tis a sad but wondrous thing to be outfitted with great gobs of sun and to be able to return to the beloved back porch. I've missed it! Fifty degrees but I'm a gamer since the wind is still.

Read lazily last night of a dreamy travel book through depressing Eastern Europe. Some things never change, the author states, like the sort of dreary Soviet feel of Hungary and Romania.

Paul Theroux has some very harsh things to say about luxury travel, including cruises, and I don't doubt he's got a point. The problem with comfort, he says, is that it's the “enemy of observation” (although Lord knows I was awfully observant of the bikini clad girls on the cruise ship) and induces such a good feeling that you “notice nothing”. Seems a tad unfair since I noticed a thousand more things on the trip than I would've at home or work, for sure. From the fishy denizens of the Caribbean to the gorgeous waters of the Atlantic to the devotional items of my Mexican cab-driver but tis true I didn't exactly learn about foreign cultures or talk with natives. Theroux says comfort “infantilizes you and prevents you from knowing the world” which I suppose is true. There's no question that wealth cocoons. He says traveling with the wealthy is a trial because they never listen and they (ironically) constantly grouse about the high costs of things.

Am transfixed by the blogger over in Dayton, Maureen at Aliens in this World, who has published a book on amazon, a very “other-directed” book, in fact a translation:


The famous medieval commentary on the Book of Revelation, translated into English for the first time in 1200 years! This book meditates on Revelation's connections to the rest of Scripture, quotes great early Christian sources, and provides timeless advice for living in a world where not every Church member acts that way.

Not surprisingly I'd never heard of the original author, a Beautus. Maureen O'Brien has a penchant for obscure-ish books even though it may well be as famous as advertised. I downloaded the first chapter and tried to like it but a good part of the problem is that I'm not a huge fan of the Book of Revelation, so there's that. But I do admire the dedication and selflessness shown by one Ms. O'Brien and hope her book succeeds.

Searching for news of Fr. Groeschel (in the hopes that he's doing okay in these, his 'post-fame' days), found a comment from a Catholic blogger a week ago referring to Fr. G: “Fr. Benedict Groeschel told me on the phone the other day that it is a poor Church that is needed.”

From Pope Benedict's book on Jesus: "Ultimately, in the battle against lies and violence, truth and love have no other weapon than the witness of suffering." Wow. That's slightly unexpected. It teeters on the brink of love = suffering? Read my Catechism and prayed the Lit of the Hours. Some good things. A line from a Psalm resonates: “Your love is better than life.” NABRE notes say this is the only time in the Old Testament that something placed ahead of life on the goodness scale. Sometimes (always?) you have to choose between the two, as Christ did when he gave up his life for us.

Felt uptight lately; blood pressure at an interstellar 151/90. Tired as well. Perhaps because there's a sense of anti-climax - I recall the thrill of watching the NCAAs at work with the “boss button” on the screen for quick exits. Now the tourney is for all practical purposes over. I recall, of course, the “thrill” of Lent, the possibility that anything could happen during the season of grace. And I recall Easter, the big denouement, even if technically it is still Easter. Seems understandable to have difficulty coming down from those mountaintop experiences, all jammed together: Holy Thursday, Good Friday, Easter…

It all looked so pedestrian
this street like a thousand others
these tracks like any other
though history happened here
and the street seemed ennobled
until I realized that it's not so much
that this spot is exceptional
but that everything is.
Posted by TS at 11:41 AM
Labels: because I can never think of a proper title

There's something like 30 or 40 copiously illuminated manuscript copies, which is fairly famous. And the art is famous if you do Mozarabic stuff, and Umberto Eco made much of its weirdness in a few places in The Name of the Rose. It's almost raw imagery (at first glance), and a lot of modern art folks like to study that.

OTOH, the mss copies were all pretty much in Spain (or right over the border in France), and within a span of a few hundred years, so poor ol' St. Beatus was not influential everywhere. Haimo and Berengaudus and guys like that were more influential on theology and exegesis overall, but they're more obscure than Beatus now. Which goes to show the unfairness of the world, I guess.

I freely admit to liking any Biblical book with dragons and monsters in, so of course I love Revelation.

Still, it really is an obscure thing to get interested in Beatus, although it's amazing how mainstream it starts to get in your head when you spend a couple-three years reading up on this stuff as a hobby.

I understand that Berengaudus fellow played a pretty good shortstop for the Yankees back in the day. I tease...