Interpretations of Losing the Ark of the Covenant

Interesting how the same event can be seen in different lights by Catholic biblical commentaries.  Collegeville casts a positive spin on the disastrous defeat of the Israelites to the Philistines which included losing the ark, the symbol of the presence of God: 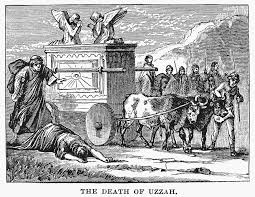 "Even when captured the ark works against the enemy for the good of Israel. This section of the narrative shows the Israelites, greatly disadvantaged before their Philistine enemy and attempting to use the presence of the Lord to bring them victory.

Israel brings the ark into battle. After their disastrous defeat at Aphek (vv. 1–2), the people of Israel look for a more efficacious defense against their most dangerous enemy, the Philistines. These “Sea Peoples” had entered Canaan from the west and had settled along the coastal plain about 1200 b.c.e. They were non-Semitic, worshipers of the grain god Dagon, and were militarily and culturally superior to the Israelites.

The usual battle strategy having failed, the Israelites send for the ark of the Lord. The Lord is described (v. 4) as seated upon cherubim, representations of winged mythological beasts which guarded pagan temples. These cherubim were positioned on the cover of the ark as emblems of God’s ministering spirits. The ark’s presence in the Israelite camp disappoints the Philistines but induces them to fight with extraordinary bravery out of fear that they might become slaves of Israel. Not only were thirty thousand Israelites slain (v. 10), but the ark itself is captured — an event that causes all ears to tingle when they hear of it (3:11)."

Other commentaries blame the Israelites for their woes. From the 1950s-era "Catholic Commentary on Holy Scripture":


In Num 10:35 we read that the Ark was carried in battle and the same was true at the siege of Jericho (Jos 3:4). On this occasion a false and mechanical trust in the material presence of the Ark was disastrous. There was a similar false trust in the Temple in the days of Jeremias (Jer 7:4). 4. ‘The two sons of Heli’: mentioned here because their fate is involved in that of the Ark. 6.... 21. ‘Ichabod’: ‘Without glory’, for the visible sign of God’s presence in Israel had gone leaving them in darkness and despair—a fitting name for the son of the man chiefly responsible for the disaster."

From the Haydock commentary:


"The Israelites had witnessed the victories which had been obtained while the ark was present. Jos. 6:4. See Num. 14:45. But they ought to have considered, that their infidelity rendered them unworthy of the divine protection; and that God was more displeased at their profanations, than at the indignity to which the sacred vessels would be exposed. He would know how to vindicate his own honour and glory. The symbols of religion were thus carried in the army, by the Persians, &c. Herod. vii.—The Romans regarded their standards as so many deities. Halicar. vi. See 2 K. 6:21. 2 Par. 13:8. C.—The confidence which the Israelites placed in the ark was commendable, but their sins deserved to be punished. W. Num. 10:35.

Ver. 4. Ark. On this extraordinary emergency they thought it lawful. Abulensis, q. 6.—They easily obtained the consent of Heli; and his sons went to take it down, and to attend it to the army, as he was incapable of doing duty. We know not what ceremonies were used, nor whether the brothers acted as high priests alternately.

In Jeremiah 3:16, the prophet prophesies that the ark will eventually be a distant memory for the people of Israel: