Stuff Mostly Unrelated but Tied Together By Helpful Asterisks

The gospel the other day could be read not only as criticism of the Pharisees but, if reversed, the characteristics of God?:


“Observe all things whatsoever they [the Pharisees] tell you, but do not follow their example. For they preach but they do not practice. They tie up heavy burdens and lay them on people’s shoulders, but they will not lift a finger to move them. All their works are performed to be seen…They love places of honor at banquets, seats of honor in synagogues, greetings in marketplaces…


Observe all things whatsoever God tells you, and follow His example. For He practices what He preaches. His burden is light and He'll help to carry it. Many of his works are performed in secret, not to be seen…He loves places of honor at soup kitchens, seats of honor at sinner's houses.

I feel like I'm in full “shark” mode, book-wise. Am hungry for text and hungry not just for the ineluctable delights of Kindle but also hungering for print editions as well, especially for classics. Burton's 17th-century classic Anatomy of Melancholy is on my short list, even more so given the high praise of Dr. Johnson (who said it was one of the few books he could read in the morning and smile, he apparently having a disgruntled morning disposition). Then too it'd be nice to have Joyce's Ulysses as well as a Chesterton Complete Works edition (though Ignatius Press's offerings are lame to the extreme - ugly paperbacks! At least if you're going to do paperbacks made them attractive, i.e. use gloss.)

Anyway my Bible-mania is spreading. The proximate cause of this itch was receiving a Folio magazine. (I checked Anatomy of Melancholy on the Folio Society website and it's $180!  No way Jose.)

I love the poetry of Isaiah! I dipped into it a bit in the spectacularly gorgeous Oxford edition. It sings, it singes! Yes the prophet does both!

Read a bit of Chesterton's poetry this morning. Dreamy. Certainly uneven but still there's a vivid image here and there and coupled with a Christian underpinning, something rare in most poetry I come across.

Somehow I'm not surprised that the 13th century interlocutor of St. Christina the Astonishing didn't reveal the details of Heaven, Hell and Purgatory as seen in Christina's vision. Somehow it seems like God holds these sorts of secrets close to His vest for obvious reasons (i.e. to discourage presumption or despair). We can speculate and some visionaries have given us numbers of a sort: most folks in Purgatory, some few to Heaven and significant group to Hell. Ah but wouldn't that be a bit prosaic, and thus unlike God, for us to die and find the reasonably predictable outcome of the above ratios? Isn't that too human a judgment? Wouldn't it be far more surprising to see 80-90-100% go to Heaven or, heaven forbid, those numbers going to Hell? I remember reading a Medjugorje seer quote those approximate numbers and felt almost disappointed. But ultimately I guess I don't understand how everyone can be going to Heaven when we've already seen in the angelic world a significant host choosing the devil and Hell. It seems unlikely that humans are somehow exempted from the awful cost of free will.

(On that happy note...let's end on something more positive:) 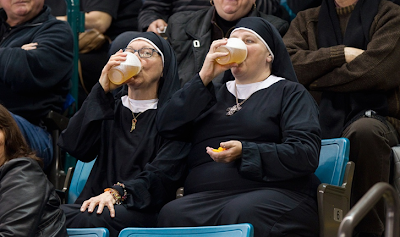 Posted by TS at 9:03 AM
Labels: because I can never think of a proper title, can't I love Isaiah too?, shouldIhavepostedthatpicture?, stats r us

You're just two asterisks short of a "Three-Dot Column".

I got something to shoot for next time.