Into each life a little retreat doth fall, so I went to one at St. Therese's Retreat Center in Columbus.  (Here, not here!)  By 5pm I'm comfortably ensconced on a couch that overlooks the natural scenery of the open window bank, namely this one: 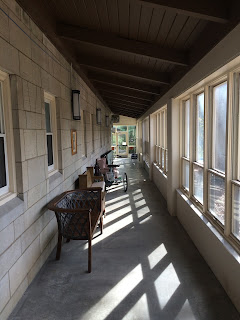 This structure was built in 1931 with splendid light availability; now the downtown Columbus Library is spending about 30 million dollars to have a similar space, an atrium with plentiful natural light.

The great Fr. John C. is holding forth on the virtue of love in this conference and the good padre just walked by my “private aerie”:


“Hello Father!” I say.
“Hi!”
“I'm making myself comfortable.” (I was laying crossways on the couch, my feet resting on the armrest.)
“Good, that's what we're here for!”

Meaning the retreat, not life itself I'm guessing.

In his first homily on spiritual prudence  Fr Corbin spoke about how...


...it's no wonder there's so much confusion around religion. We often aren't prudent concerning the things we can see, let alone that which we cannot. Which is why we need to pray to ask to be given light.  An example of spiritual imprudence was the mean nun in Song of Bernadette film who, due to her strenuous fasting schedule, felt a more worthy recipient of the apparitions at Lourdes.

Mentioned the confusion of the bishops at the Synod as illustrative of the difficulty around spiritual prudence.  Little things matter hugely in the Kingdom of God: Imagine a child being cuffed by police at the Louvre. “Oh, what could he have possbily done so bad?” you ask. "He drew a mustache on the Mona Lisa!."  “Oh yes, now I understand!”

Little things matter a lot in the case of a masterpiece. If the child had drawn a mustache on wallpaper of your house, you might smile or not much care.   So, are we old wallpaper or God's masterpieces?  We see ourselves as wallpaper, but God sees us a masterpiece and takes little things seriously.

The synod on marriage is an example in that the Bible points to marriage as a symbol of Christ's love for his people. A masterpiece. We may see it as no different than a strong friendship, and you don't vow to stay friends with someone forever. In the eyes of the world, marriage makes no sense. Divorce tarnishes the image of the love of God for his people. The boy ruining the Mona Lisa ruined it for others. Similarly the divorce culture to those with eyes of faith.

To over-intellectualize love is what Communism tried to do.  Stalin instituted reforms that suppressed natural affection (such as for one's land) for the common good. You have to turn in your spouse if they undermine the system. The greatest good for the greatest number of people was the rule, without regard to personal emotion you might feel for your land or your spouse.  To make our love entirely intellectual results in the French Revolution and the Stalin regime.

The other error is less dangerous but much more common these days. It's less prone to being systematized. It's an oversentimentality that reduces love to mush, to merely an emotion.  An example is “pet parents”, by the fetishing of animals.  Example being a lady who called in on a vet show asking what to do about her dog making a friend of a neighbor's dog and they're moving.  Should she make doggie visits to Germany?   "Mushiness" collapses the difference between human and animal.

Our mind and body are fused, which is why environments matter. The Word became flesh - the Word didn't put on a cloak of flesh. Emotions are more than just physiological, they are elevated by mind.  This is why beautiful churches matter.  Stained glass windows aid our emotional bond with God.

[Regarding the importance of environments, I asked him why Europe is so weak in faith given so many beautiful cathedrals and he said because aesthetics is not a replacement for faith. In the Middle Ages the people saw the soaring towers and stained glass beauty and saw God, while moderns maybe see technical genius, great artistic technique, or a nostalgia for the faith of old, etc.. He said some do come to faith via going into a cathedral and being wowed, but it doesn't happen too often.]

We need passion to get us going. Passion moves us, otherwise we'd never get out of bed. Mind and body linked which is why we act to avoid evil or to gain good. If mind and body weren't linked we wouldn't move out of a burning bedroom; we'd note the burning with our mind with detachment.

We all love, because we all move, and love is the basis for all action. We move out of the burning building because we love ourselves. So the trick is, as St. Augustine said, to love rightly so that we'll act rightly.

Even though we are rational beings, we can't will love, or force it. There needs to have something trigger it.  Good is what turns the will on. You have to see something good in something or someone in order to love them. There's no such thing as pure will power. When someone doesn't do something they say they want to do, Fr C tells them that they simply don't see enough good in the action.  If I don't eat well, it's because I don't see enough good in eating well.

Love draws you out of your comfort zone, which is why people do foolish or awkward things when in love. You find yourself in awkward situations. Goodness is the lure, the trap, that God uses to get us out of ourselves.   God got "out of Himself" by creating in the first place, and by becoming man in Christ.

Ecstasy means literally going outside one's self, one's body. We do this when we sacrifice for someone, and when we physically die, when our spirit literally leaves our body.

God's ecstasy was via creating and by going outside himself by coming to earth in the incarnation.

Fr. C says he sometimes gets harsh criticism from homilies that he considers innocuous. A recent one that drew fire was when he said, “God treats us as friends, not pets.” People were outraged, as if he were demeaning pets: “My dog is my friend too!”

Aristotle mentions three kinds of friendship: pleasure (i..e. sharing a love for stamp collecting), useful (politics and business - a means to an end), and virtuous. The last is wanting someone to have good things - not a zero sum game. Example is how you wish for someone else a greater knowledge of God because that's what you want for yourself as well. And you both share the fruits of your respective knowledge. 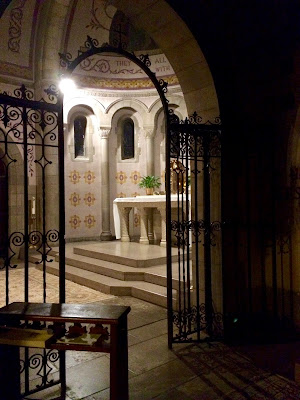 Overheard a guy call his wife during retreat:


“Well, I haven't pissed anybody off yet, and no one's pissed me off.”

A kind of small bar to hurdle, one would think.

A thought that occurred to me last week while bearing a tiny gripe: "Cross, meet carry. Carry, meet cross. Let no man put asunder what God has joined."

Heard an older gent talking about his time choppering in Vietnam, of differing ration amounts, of temperature variances (130 degrees on ground, nice and cool in the chopper), of the fact they had a px and his wife sent him tons of stuff including better flak jacket. Probably 65-67 years old now - hard to believe that a war in my lifetime has participants nearing 70.
Posted by TS at 3:10 PM
Labels: for the archives, homily heard

St. Therese is a lovely retreat center. I go there once a year and always mean to take photos, and never do. I love the little cell bedrooms, and the old waxed tile floors. It has an institutional beauty of the old style.

Yes, so true. I liked that the priest mentioned the value of beauty in environment when we were in such a beautiful environment.