Revoking My Right to Vote

I voted for arguably one of the worst presidents in the last 40 years (George W. Bush).  I also did not vote for Trump, and although it's absurdly early to speculate he may end up doing well based on the Jim Geraghty piece below.  If Trump turns out decent I probably should never vote for president again!

We may quibble with a few [of Trump's cabinet choices] here and there, but overall it’s a really good group, particularly considering the perceived limited circle of connections and talent around Trump during the campaign. By and large, this is a pretty darn conservative cabinet, and one that’s sufficiently experienced, professional, knowledgeable, and prepared for the massive tasks before them. In fact, if any of the other 16 Republican presidential candidates had won, it’s easy to picture some of these same names appearing in those alternative Republican cabinets.

Perhaps most surprising is that some of the figures most loyal and visible during the campaign haven’t been named to any cabinet positions yet: Newt Gingrich, Rudy Giuliani, and Chris Christie. (There’s the rumor, not yet officially announced, that Ben Carson will run the Department of Housing and Urban Development.)


During the campaign, quite a few conservatives uncomfortable with Trump noted that they would feel better if Mike Pence was the guy really handling the details. We might be getting something akin to that scenario:

Trump’s choices so far have reflected Pence’s politics -- potentially proving helpful on Capitol Hill, where the Indiana governor and former House Republican leader has long been expected to help Trump most. Pence’s devotion to conservative principles -- and his relationships with powerful groups, including the Heritage Foundation -- have allowed him to help Trump navigate a Washington terrain that is unfamiliar to the billionaire business mogul who just ran his first campaign for any office.

A top Pence aide said Tuesday that Trump and Pence consult on all Cabinet picks -- Pence even got a close friend, Representative Jeb Hensarling (R-Texas) into the mix for Treasury secretary, though that nod ultimately went to Steven Mnuchin -- and that they communicate throughout the transition.

As for the relationship, the aide said they can look like something of an “odd couple” -- but the balancing works. Pence, the aide said, was the only person who would have had the discipline to make it through a gauntlet like that campaign and not lose faith.

Do you recall the Obama administration’s “stray voltage” theory? The gist was, “the president purposefully overstates his case knowing that it will create controversy… Controversy sparks attention, attention provokes conversation, and conversation embeds previously unknown or marginalized ideas in the public consciousness.” Part of it was a cynical calculation to let an argument about a presidential statement ensure a topic stayed front and center in the public’s mind; there’s also the side effect of ensuring that a brouhaha about a presidential statement overshadowed actual policy decisions – decisions that may be more consequential, but are less dramatic and interesting to the news media.

Almost like, say, a president-elect declaring he wants to strip away the citizenship of those burning the flag.

If the incoming Trump administration really is using a variation of the “stray voltage” approach, and Democrats really have an uncontrollable impulse to focus on the controversial statement du jour, the Trump administration could end up being stunningly effective in policymaking. A lot of seemingly dry and boring regulations can be repealed, executive orders withdrawn, rewritten, and issued, legislation passed by GOP majorities in Congress and signed, all while the political world froths at the mouth about the president’s latest Tweet or denunciation of the media, or theater performers, or anything else that comes to mind.

You can enact sweeping, dramatic changes to Americans’ lives under the radar. As our friends at the Weekly Standard noted, the charter school movement grew enormously over the past 25 years, in large part because it wasn’t a big, Washington-focused political battle. Today, “43 states have charter-school laws, and approximately 3 million kids attend almost 7,000 charters across the country.” This happened without any giant federal legislation or heated governmental clashes in the national spotlight.

Could this really happen? Could the next four (eight?) years really turn out to be a golden era for conservative policy?

Maybe I can't be too hard on myself. Maureen Dowd wrote this summer about how impossible it is to cast an informed vote: 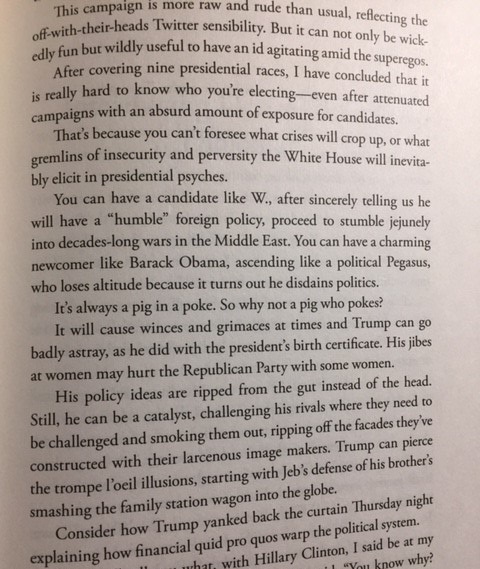