From Word Among Us: 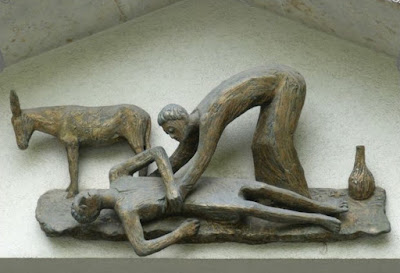 A rich repast from Ross Douthat here on Catholicism. Makes sense to me.

The toxicology report came out about that girl from my alma mater who drank herself to death. Traces of marijuana and a whopping .347 blood alcohol level. It looks like asphyxiation - she had her head face down on the pillow. My sister surprised me by last month saying that she always tells her kids that if they drink to excess to not sleep so that they could drown in their own vomit, because when the body is that intoxicated sometimes it doesn't turn over or do the normal things to breathe or project vomit. I never would've thought about that, and she said that before the position of the victim was known. It goes to show, I thought, of how important our collective wisdom is, how this little thing like positioning a drunk could be life or death.

It seems she had a similar incident in November, with the police filing a report on her given a .3+ blood alcohol level and obvious intoxication.  It was as if that was an opportunity for her, as if she were given another chance to choose "life or death" as Moses put it. So sad.

Read wide-eye opening opinion piece by Robert Samuelson of the WaPo, hardly a shrinking righty, on the media's obsession with Trump:


"But beyond this lies a silent goal [of the press]: the search for some impeachable offense. If found, this would clearly justify the media’s obsessive attention to the president’s every move and policy. But if not found, the press risks losing more of its credibility by conducting a political witch-hunt."

Good to hear from a centrist like Samuelson of the media's true goal, that of impeachment. A press scorned is not a pretty sight. Wise commentary from him all the way around. I guess it takes an economist, a numbers guy, to have the detachment necessary to be wise since anger, like euphoria, makes one stupid. Witness the reliably idiotic Mark Shea.

From a Catholic site:


Of course, the Catholic faith is about divine mysteries, not human rituals, however treasured...This distinction is what gave the fathers of the Second Vatican Council the boldness to tamper with the most ancient rites of the Church. Yet Aquinas saw something that too many in that time did not: ritual cannot be dispensed with and should not be disparaged. We need solemn ceremonial forms not because they are essential but because humans have always tended to comprehend the profound through the trivial.

We need fixed and tangible ways of perceiving divine mysteries. This is why Aquinas defends not only the importance of ritual but also the use of images in Church. He offers three arguments. First, images are necessary for the instruction of simple people. Second, they aid the memory by daily presenting the example of the saints. Third, they help to excite devotion.

Really, though, Aquinas’s three reasons are one. Though he first defends images as useful for the instruction of simple people, he then goes on to explain why they are useful to us all. For learned and unlettered alike, memory is imprinted and emotion aroused “more effectively by things seen than by things heard”. Aquinas was sophisticated enough to realise that all men are simple. If the poor need art and ritual, so does everyone.


Crank Up Some Village People

Young man, there's a place you can go.
I said, young man, when you're fighting the foe,
You can go there, and I'm sure you will find
A smart way to have a fine time.

From a book called Shakespeare and Sex and Love:


Shakespeare's writings are full of a sense of the tension between the spiritual and the earthly, and awareness of the difficulty of understanding when and how the sexual faculty, which may be terribly abused in the search for sensual gratification... Shakespeare often seems to be asking when desire stops being lustful and starts being love? What is the relationship between lust and love? He explores the theme repeatedly in both plays and poems, and it will recur in later pages of this book. (It is akin to the question of where, in the visual arts, artistic portrayal of nakedness or of sexual behaviour shades into pornography.)

I got sidetracked last night by "fake news", specifically an utterly incompetent family tree version on ancestry, presumably a third cousin or more distant. It's an embarrassment to the Conn- name. At first I was thrilled since it had so many breakthrough "facts", names and dates that I wasn't able to uncover in my research. But as I painstakingly went through her sources, I found it Trumplivious to truth. So that was a time suck with no payoff.

One of the things that strike me as qualitatively different between the Latin mass and the New Mass is the seriousness of the former. The stakes feel higher, like salvation is at stake. It's sort of like the difference between an average May MLB baseball game and a World Series game.

Obviously we don't know in terms of numbers how many go to Heaven and how many to Hell, but we do know that demons exist and their existence alone ups the ante. It's hard to imagine an exorcism at the New Mass - in between the syrupy hymns and Father's announcements - but at a Latin Mass you can well imagine it.

I'm not sure one needs that seriousness weekly or even monthly, but it does seem like an indispensable reminder that God is much bigger and more mysterious and awesome than we think.

The Eastern church maintains that focus in their liturgy. With infant Baptisms, for example, it's not all cute and bubbly, but serious: there's an actual exorcism performed just in case...!


...the drama in the church is a kind of photonegative of the drama in Washington, D.C. In both contexts, a provisional center has cracked up, and a form of steamrolling populism has taken power. In both contexts, ideas from the fringes — far right and far left, radical and traditional — suddenly have unexpected resonance.

The difference is that in Rome the populist isn’t a right-wing president. He’s a radical pope.

...In the context of the papacy, in his style as a ruler of the church, Francis is flagrantly Trumpian: a shatterer of norms, a disregarder of traditions, an insult-heavy rhetorician, a pontiff impatient with the strictures of church law and inclined to govern by decree when existing rules and structures resist his will.

His admirers believe that all these aggressive moves, from his high-stakes push to change church discipline on remarriage and divorce to his recent annexation of the Knights of Malta, are justified by the ossification of the church and the need for rapid change. Which is to say, they regard the unhappiness of Vatican bureaucrats, the doubts of theologians, the confusion of bishops and the despair of canon lawyers the way Trump supporters regard the anxiety of D.C. insiders and policy experts and journalists — as a sign that their hero’s moves are working, that he’s finally draining the Roman swamp.

Meanwhile the church’s institutionalists are divided along roughly the same lines as mainstream politicians in the face of Trump’s ascent.

...The ranks of papal skeptics are filled with Africans and Latin Americans as well as North Americans and Europeans, with prelates and theologians and laypeople of diverse economic and political perspectives. Most are not traditionalists like Burke; they are simply conservatives, comfortable with the Pope John Paul II model of Catholicism, with its fusion of the traditional and modern, its attempt to maintain doctrinal conservatism while embracing the Second Vatican Council’s reforms.

But because this larger group is cautious, its members have been overshadowed by the more forthright, combative and, yes, reactionary Cardinal Burke, whose interventions might as well come with the hashtag #TheResistance.

Which places him in the same position, relative to Francis, that a Bernie Sanders occupies relative to Trump — or that Jeremy Corbyn occupies relative to Brexit. He’s a figure from the fringe whose ideas gain influence because the other fringe is suddenly in power; a reactionary critic of a radical pope just as Sanders or Corbyn are radical critics of a suddenly empowered spirit of reaction.

So the story of Catholicism right now has less to do with reaction alone and more to do with what happens generally when an institution’s center doesn’t hold.

In his own way, no less than neoliberals in Western politics, John Paul II tried to forge a stable post-Second Vatican Council center for Catholicism; now, much like the neoliberal order in Western politics, his project seems to be collapsing. The church under Francis has moved left as Western politics has moved right, but the reality in both cases is one of polarization, of a right that wants to be more reactionary and a left that wants to be more radical, and an establishment uncertain how and where to move.

But just as the Trump era may turn liberals into radicals, the Francis bulldozer is making a traditionalist critique of the entire post-Vatican II church resonate on the younger Catholic right — which is already more skeptical of modernity than the John Paul II generation. And with a traditionalist turn in theology could come the return of an illiberal or post-liberal Catholic politics — one already visible here and there online, in the zeal of certain Catholic trads for Trumpism and far-right politics in general.