Visited the Columbus Museum of Art and showed off my newly purchased CMA membership which allowed free entree into said establishment and free Russian exhibition. It was larger than I expected, rooms full of art and photos from the old Soviet Union, mainly 1970 through 1993. Another world it 'twas. I especially wished I'd have snapped a pic of a homely group next to the Cyrllic letters of a billboard outside a bar. So, so foreign. Instead took a pic of a painting of Lenin as Jesus Christ with the legend: "The Anti-Christ". 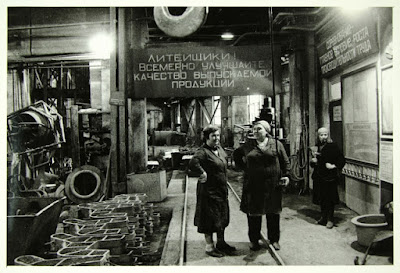 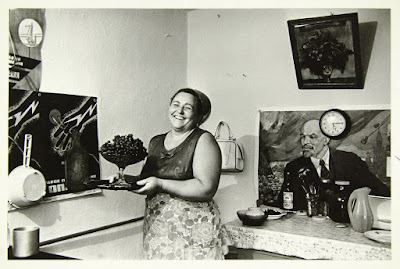 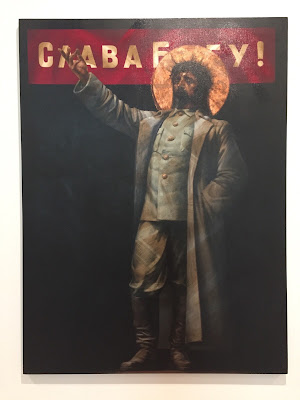 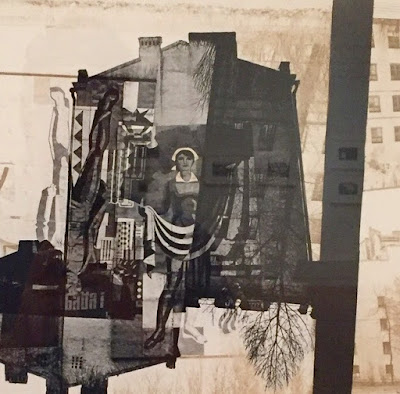 I'm noticing a subprime sun length, like Trump's fingers, these days.  By the time I get home walk the dogs, water the grass, and eat, the sun is on the downward spiral. Like Trump ten minutes after the election.

I still find it slightly incredible that his war with the media began literally the day after the election, over crowd size.

Still, they can't take election night away from him or Republicans. For one brief shining moment Hillary was defeated and there was a glimmer of hope that Trump might sober up and fly right. I would pay good money for a DVD of the election night coverage, to see again the crestfallen faces of the liberal anchors and pundits, to experience again the "Do You Believe in Miracles?" Al Michaels moment. The biggest underdog in the history of underdogs won the election. Unfortunately, it looks like that was the high water mark of his presidency. Or un-presidency.

Possibly voters will learn from the Trump experience that politics and policies ain't so easy, and that there's no such thing as a free lunch. It seems like it could be damaging to a potential Bernie Sanders run given people might - *might* - be more in contact with reality. Not holding my breath since the Savior Obama should've already sent that message. You'd think after Obama people would want experience and competence, like a John Kasich.....


One of the things I most crave about retirement is sucking in the savor of summer. Nowadays it's hit or miss - mostly miss. Not even a Shakespeare play at the park. Wicked fast went the past two months. A blur. The antithesis of lazy days drinking lemonade on a hammock.

So for healing purposes took a German Village bike ride on the visually dulcet day. Had a hot dog and donut at the wonderfully Teutonic Jeurgens .

I rode down south to "Hungarian Village" (a village I knew not existed in Columbus), then off to the Parsons Avenue borderlands. Danger Will Robinson. 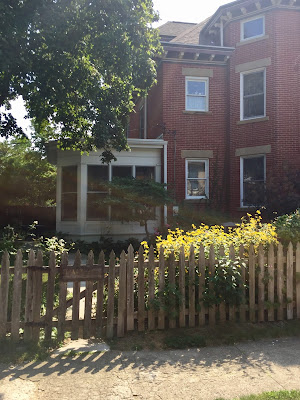 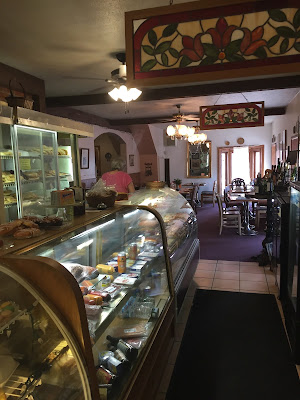 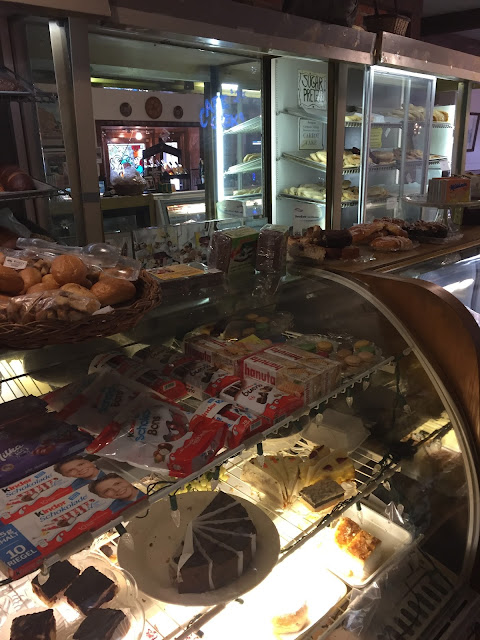 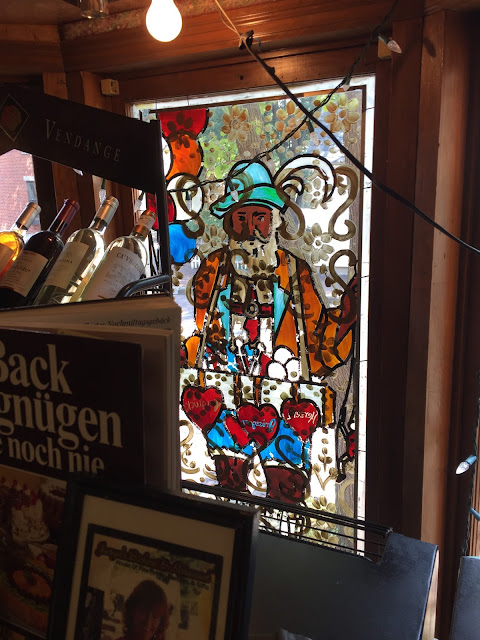 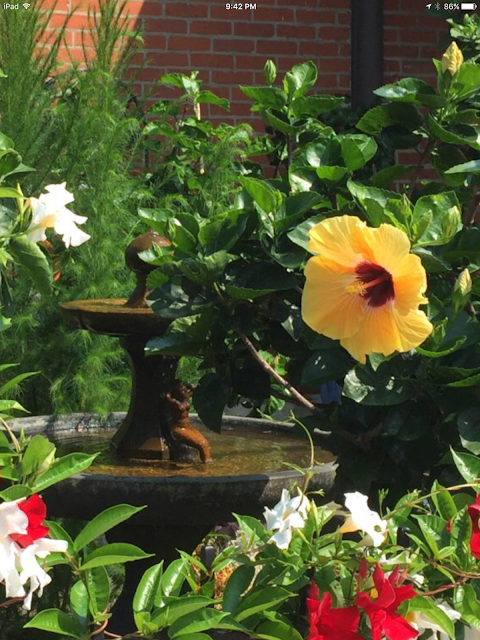 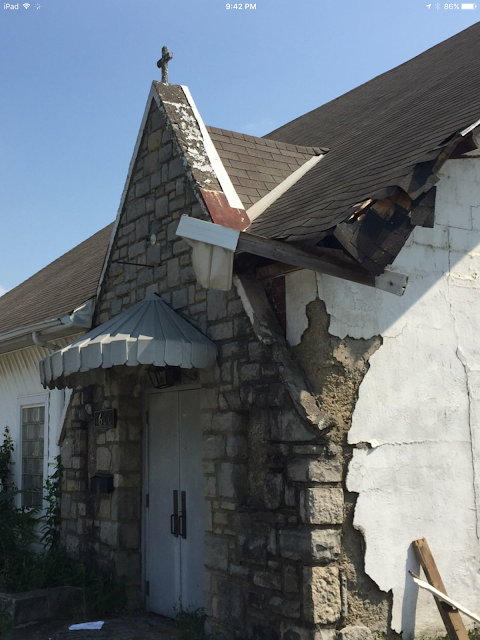 I've been pondering the words from Genesis 3, regarding the fall, on the nature of the apple and how Christ became that apple. It's almost like a perverse/reverse Communion in Gen 3:6:


"So when the woman saw that the tree was good for food, and that it was a delight to the eyes, and that the tree was to be desired to make one wise, she took of its fruit and ate; and she also gave some to her husband, who was with her, and he ate."

Jesus became the apple in that he is a delight to our spiritual eyes and makes us spiritually wise. Then Eve shared the food, shades of "take this, Adam, and eat of it...".

Decided to hit home for lunch because of the big celestial show, the eclipse.  With eclipses, I think there's the scarcity principle at work. If peanut butter was scarce, everyone would crave it. I think a partial eclipse is like a limited edition modern artwork - few would want it except that it's rare and assigned value by many. But skepticism aside, I wanted to give it a good try.

By 1:30 it was already starting to occlude but no visible difference in sun. By 2pm, it's darkened, like before you get a rainstorm. When you look through the protective glasses you see partial sun, making it appear similar to a partial moon.

Sunlover that I am, I'm not necessarily a fan of any celestial object getting between me and the sun. Mostly I'm coming away shocked that the moon can cover 85% of the sun and the power of the latter is still enough to see things outdoors easily.

Spent an hour last night watching Raymond Arroyo's fine interview with Jerry Lewis on YouTube. Lewis called Raymond the best interviewer he's ever had, which is saying something. He said Arroyo actually listens, and that's what sets him apart.

Very touching interview that made me feel small given the largeness of the comic's spirit. When asked why his endless toiling for MDA telethon, he said simply that that was the only way to raise that kind of money. Shades of be careful what you're good at, because then you'll be irreplaceable more or less.

His work ethic was tremendous. My slothful thought is that a comedian can "phone it in" since no one lives or dies during a show, but Lewis was cannier than me. God recognizes the last shall be first; perhaps the comedians before the surgeons. Arroyo mentioned how healing laughter can be, and Lewis mentioned how after a show a lady was crying, and Lewis admitted her to his dressing room, and she said that his show was the first time she'd laughed in 7 years, since her son was killed in Vietnam. And he was bowled over and remembered that every time he wanted to do less than his all. He said out of a crowd of hundreds there are always 4 or 5 individuals who need his gift. Very moving.

I suspect part of Arroyo's gift as an interviewer and his ability to connect with Lewis was the fact they are simpatico spiritually, both more evolved than the average joe or jane.

On a day offering a perfect blend of summer and fall, the sort of day presaging new beginnings, of college day move-ins during those eventful early '80s years, we gathered at the funeral home for a death in the family.

Come up to our house in 2024! Delaware is right in the path of totality. After having seen this eclipse, we're junkies. It has to be seen to be believed.

Sounds fab to me! My uncle drove to KY and saw the totality and said it's a completely different experience than a partial, so God-willing I'll be around for the next.