This Patrick Leigh Fermor dude ("A Time of Gifts) could flat-out write; here about the Hofbrauhaus in the 1930s:


I was back in beer-territory. Halfway up the vaulted stairs a groaning Brownshirt, propped against the wall on a swastika’d arm, was unloosing, in a staunchless gush down the steps, the intake of hours. Love’s labour lost. Each new storey radiated great halls given over to ingestion. In one chamber a table of S.A. men were grinding out Lore, Lore, Lore, scanning the slow beat with the butts of their mugs, then running the syllables in double time, like the carriages of an express: “UND—KOMMT—DER—FRÜHLingindastal! GRÜSS—MIR—DIE—LORenocheinmal.” 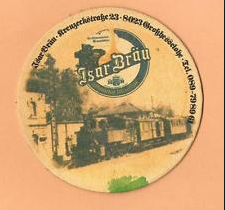 But it was certain civilian figures seated at meat that drew the glance and held it. One must travel east for a hundred and eighty miles from the Upper Rhine and seventy north from the Alpine watershed to form an idea of the transformation that beer, in collusion with almost nonstop eating—meals within meals dovetailing so closely during the hours of waking that there is hardly an interprandial moment—can wreak on the human frame. Intestine strife and the truceless clash of intake and digestion wrecks many German tempers, twists brows into scowls and breaks out in harsh words and deeds. The trunks of these feasting burghers were as wide as casks. The spread of their buttocks over the oak benches was not far short of a yard.

Huge oval dishes, laden with schweinebraten, potatoes, sauerkraut, red cabbage and dumplings were laid in front of each diner. They were followed by colossal joints of meat—unclassifiable helpings which, when they were picked clean, shone on the scoured chargers like calves’ pelvises or the bones of elephants. Waitresses with the build of weight-lifters and all-in wrestlers whirled this provender along and features dripped and glittered like faces at an ogre’s banquet. But all too soon the table was an empty bone-yard once more, sound faltered, a look of bereavement clouded those small eyes and there was a brief hint of sorrow in the air. But succour was always at hand; beldames barged to the rescue at full gallop with new clutches of mugs and fresh plate-loads of consumer goods; and the damp Laestrygonian brows unpuckered again in a happy renewal of clamour and intake.

I strayed by mistake into a room full of S.S. officers, Gruppen- and Sturmbannführers, black from their lightning-flash-collars to the forest of tall boots underneath the table. The window embrasure was piled high with their skull-and-crossbones caps.

The vaults of the great chamber faded into infinity through blue strata of smoke. Hobnails grated, mugs clashed and the combined smell of beer and bodies and old clothes and farmyards sprang at the newcomer. I squeezed in at a table full of peasants, and was soon lifting one of those masskrugs to my lips. It was heavier than a brace of iron dumb-bells, but the blond beer inside was cool and marvellous, a brooding, cylindrical litre of Teutonic myth. This was the fuel that had turned the berserk feeders upstairs into Zeppelins and floated them so far from heart’s desire. The gunmetal-coloured cylinders were stamped with a blue HB conjoined under the Bavarian crown, like the foundry-mark on cannon. The tables, in my mind’s eye, were becoming batteries where each gunner served a silent and recoil-less piece of ordnance which, trained on himself, pounded away in steady siege. Mass-gunfire! Here and there on the tables, with their heads in puddles of beer, isolated bombardiers had been mown down in their emplacements.

Er, I'll have what he's having.

I haven't watched the movie "Lost in America" in 25 years so it was an unanticipated science experiment to watch it again recently and find it much less compelling. Where once I saw humor in the main character's not-so-quiet desperation, now I find it heavier lifting.

For one thing, I'm not obsessed with retiring early and seeing the country in an RV. That dream-ship has sailed. I'm more into sunlight nowadays than city light. So some of the film would naturally lessen in impact now.

Seems I also have had more of a tendency to want upbeat things, primarily upbeat music (primarily jazz) and tv.


Rural and working-class, white Americans are also pessimistic about their retirement prospects. Their views are one reason that only 13% of Americans expect to retire before age 60, down 10 points since 1999. The share of Americans who say they will retire at 70 or older has climbed 10 points.

A Time of Gifts is up next in my reading queue. Fermor is so delightful, and his sense of observation so keen. I suppose it helps to have your 18-year-old diaries edited by your decades-older, more experienced self.

Ha, yes I think one gets the best of both worlds that way - the sheer, cussed creativity of youth tempered by the editing of your experienced self.