Welcome to the Hotel Transylvania...

Got back home from work yesterday and we had  all three grandkids for baby-sitting purposes. Rented a surprisingly good kids movie, Hotel Transylvania 3. Graphics were pretty stunning and beautiful. And funny as hell in places. Pretty engrossing, although the kids tuned out (and turned on their tablets) after about an hour, as they’d already seen it once or twice before. But Sam insisted I watch to the finish. I couldn’t get over the resemblance of the Count to EWTN’s Raymond Arroyo. Separated at birth. 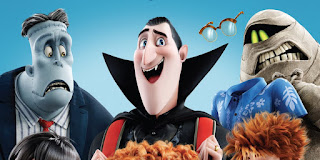 I used to lament how the 2-5 year old grandkids are like charming drunks - just so alive and funny and full of wonder but of the black-out variety and every moment I spend with them now will never be remembered when they're older.  But I don't seem to care too much after all.  Just living in the moment sort of thing and enjoy it.  I do feel guilty for lavishing so much more attention on our 2-year old than the 6 and 8-yr olds despite the 6 and 8 year olds being not in the amnesia phase.

Anyway, it's a decent break from the clamorous nonsense of current politics in which Liz Warren thinks she’s a squaw based on a drop of Native American blood, and Saudi Arabia, like O.J., is searching for the real killers. (I suspect the shock of the Western press over the murder is not replicated by the average American who knows who the Saudis are.)  If the ancient Romans offered bread and circuses to distract the citizens from politics, modern American offers politics (circus) to distract us from the more important things.  Perhaps non-distraction has its risks though: came across this about poet Donald Hall: "Often, at night, solitude loses its soft power,” says Donald Hall in the film, “and loneliness takes over. I am grateful for when solitude returns.”
_

Came across a Chesterton quote:


"The next great heresy is going to be simply an attack on morality; and especially on sexual morality. And it is coming, not from a few Socialists surviving from the Fabian Society, but from the living exultant energy of the rich resolved to enjoy themselves at last, with neither Popery nor Puritanism nor Socialism to hold them back... The roots of the new heresy, God knows, are as deep as nature itself, whose flower is the lust of the flesh and the lust of the eye and the pride of life. I say that the man who cannot see this cannot see the signs of the times; cannot see even the skysigns in the street that are the new sort of signs in heaven. The madness of tomorrow is not in Moscow but much more in Manhattan - but most of what was in Broadway is already in Piccadilly."  - [G. K.’s Weekly, June 19, 1926]

I researched a bit about what London/Piccadilly was like in the '20s though I suppose the quote speaks for itself. His referring to Broadway and Piccadilly, both theater and club districts, could be to the red-light district and “flapper” living of that period. People are saying he’s a prophet but for him to write that in the roaring ‘20s seems not too prophetic, as he says by rhetorically asking "who cannot see this?".  He was certainly right about New York being a bigger threat than Moscow, which surely wasn't obvious at the time so that certainly is prophetic.
_ 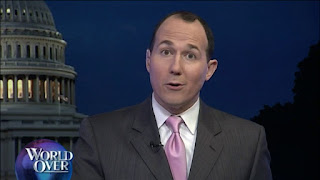