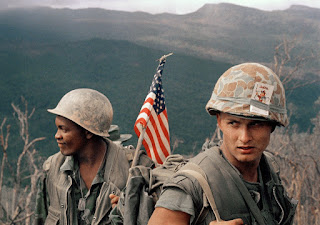 Why did U.S. faithfully and inexorably reenact France’s failure in Vietnam? From hubris to napalm to trying to piss off the locals to losing 50k+ men to not understanding that to win a piece of land only to abandon it the next day was no way to win a war ... It’s maddening that LBJ or JFK couldn’t sit down and talk with French leaders asking, “so what can you tell us about fighting in Indochina so that we don’t make the same mistakes?”. But we didn’t apparently and arguably the Vietnam War was what helped killed all authority, even extending to that of churches perhaps.
___

But the middle class is different because most know privation and surplus and greatly prefer the latter and worry about securing it.

The rich know they can buy their way out of difficulty, and the poor that they’ll never avoid difficulty, so it’s only the middle class perhaps with something to lose.
___

“Why do demons wish to excite in us gluttony, fornication, greed and other passions? So the mind, under the weight, should be unable to pray as it ought. When the passions of our irrational part begin to act, they prevent the mind from acting rationally.” - St. Nilus of Sinai
___

Started reading more of the Eric Gill biography last night. One fascinating bedeviled personality is he.
___

My ambition has always been to lack ambition.  Sort of my super power. But now I realize that lacking ambition is not a good or bad in itself and that the ambition I should have is God’s ambition for me, whatever that might be.  Because God, for sure, doesn’t lack ambition. Just look around. His ambition for some might look slight, but that’s only on the surface.
Posted by TS at 1:20 PM