It never fails to be amaze me at how quickly things have fallen apart.  It’s stunning to think that something like 93% of Americans called themselves Christians in 1965.  Or that out-of-wedlock births were exceedingly rare then. Or that sin wasn't celebrated or inspired pride.

All of the societal pillars seemed to began falling almost simultaneously, be it religion, the family, schools, and politics.

I’m wondering how much of it was top-down, of college professors becoming radicalized during the ‘60s and ‘70s, which led eventually to compromising all of education, which led to the collapse of religion, morality, family, etc.

Recently I've become more aware of how school discipline has cratered. It seems partly due to legal actions that prevented schools from expelling students.  I have no idea if corporal punishment in schools was effective, but it's been banned in 32 states, mostly happening during the 1980s.

I roughed up a graph with some of these factors, emphasis on “rough”: 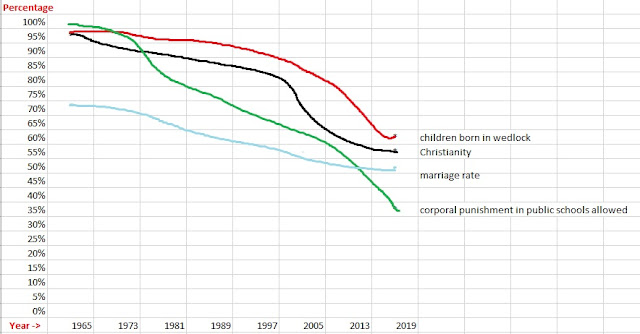