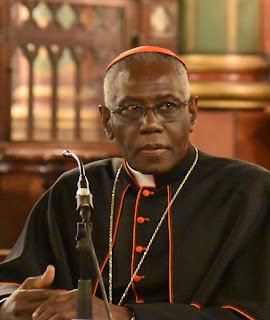 I’ve grown increasingly intrigued by Cardinal Sarah. Partially on the strength of the Martel scuttlebutt (in In the Closet of the Vatican), about how he’s a true believer, a mystic monk, and frighteningly silent, or words to that effect.

Perhaps part of it is the contrast he presents from Francis.  When the latter was elected I figured after decades of good papal leadership it was time for a reversal. The natural tides insist on a return to the norm sooner or later. But I expected more of a doctrinaire liberal (i.e. emphasizing climate change, immigration, against death penalty, etc..), rather than someone as outwardly aggressive, passively aggressive, and impolitic. And of course there’s the flirtations with outright heresy.

But Sarah’s book on silence is really affecting and is so married to the moment that it feels prophetic and God-timed. I couldn't get into his first book, “God or Nothing” but didn't giver it a fair reading because I only read a fraction.

Here is his diagnosis of the why behind this age of the new atheism:


God’s silence questions mankind on its ability to enter into the mystery of life and hope at the very heart of suffering and hardships. The more we refuse to understand this silence, the more we move away from him. I am convinced that the problem of contemporary atheism lies first of all in a wrong interpretation of God’s silence about catastrophes and human sufferings. If man sees in the divine silence only a form of God’s abandonment, indifference, or powerlessness, it will be difficult to enter into his ineffable and inaccessible mystery. The more man rejects the silence of God, the more he will rebel against him.

The silence of God is elusive and inaccessible. But the person who prays knows that God hears him in the same way that he understood the last words of Christ on the Cross. Mankind speaks, and God responds by his silence.

To believe in a silent God who “suffers” is to make the mystery of God’s silence more mysterious and more luminous, too; it is to dispel a false clarity so as to replace it with a “shining darkness”. Because I do not forget the words of the Psalm:“ ‘Let only darkness cover me, and the light about me be night,’ even the darkness is not dark to you, the night is bright as the day” (Ps 139:11-12).

With friendship and tact, the important thing is to ask these people to accept the mystery of the divine silence by making an act of surrender and of faith in the salvific dimension of suffering. If man remains fixed on materialistic and rationalist certainties, he always bets on this hypothetical abandonment of God. Love, by its essence, implies a leap into the unknown.

I really like Cardinal Sarah. I did read God or Nothing (ironically I haven't finished the one on silence yet, it is buried on my desk awaiting my return to it.). The Vatican left him hanging out to dry when he urged the Mass said ad orientum, but he just moves on. He tells the truth without dishing out criticism of political adversaries - because he doesn't see the world politically.

Yes I wish I was more like him too. I was a little surprised to see he dedicates his latest book to Popes Benedict and Francis, and calls Francis a faithful son of St. Ignatius.