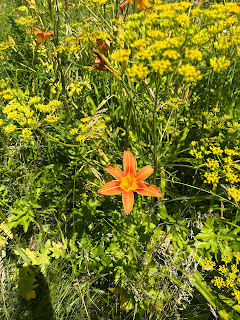 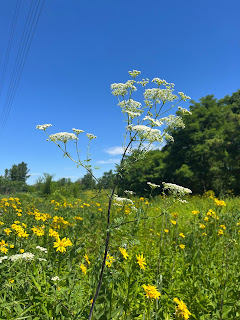 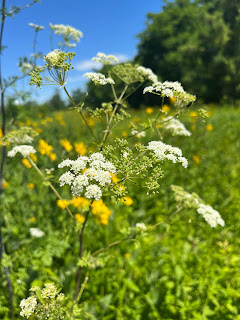 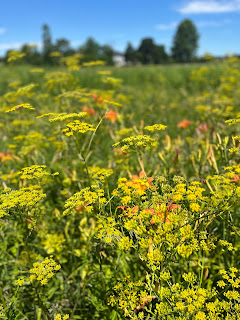 As a connoisseur of fine weather I've of late been savoring. And remiss in appreciating.

Last week there was the sweet savor of breeze overlooking a shining sea beneath our seven foot tall open-air tent. Listened to Gordon Lighrfoot’s, “If You Could Read My Mind”.  An hour before and an hour after 12pm is my favorite time of day for watching the shellacked waves, shiny as if varnished. The green and yellow croquet balls rolling in the middle distance from gamers. A firm sand floor, neatly swept by the wind. The “stable-unstable” tent, poles dancing to the wind’s whims but never collapsing. The ever-approaching sea, with tide as hourglass.

And no less, back in Ohio. Pure June weather undistilled and unadulterated.  The rich, alluvial soil against the healthy garden plants, now over a foot tall and well on their way to tomato glory, well over transplant shock.

Breeze and sun, instant welcoming warmth from morning till long into the evening. The candle is lit at both ends, from 6am to 9pm.  Laying in the sun and half-dozing, with half-ish memories of long ago bubbling up courtesy of reading some T.S. Eliot poetry...

For most of us, there is only the unattended

Moment, the moment in and out of time,

The distraction fit, lost in a shaft of sunlight,

The wild thyme unseen, or the winter lightning

Or the waterfall, or music heard so deeply

That it is not heard at all, but you are the music

While the music lasts. These are only hints and guesses...

Took the dogs to new joint, a local park, thinking we could walk those idyllic and elegiac old grass trails since it was 15 degrees cooler than the last couple of days . But too hot for Max or so he told me by putting on his brakes and laying in mid-path. He’s always aware of the direction of the car and after about ten minutes was only satisfied if we were going towards the car rather than further away.  Our other hound was obsessed with the rabbits and groundhogs that lived in the two to three foot high bramble beside the trail.

The sun burns memories on my skin

Revealed when the sun seals again

Laying on towels at the municipal pool

Effecting the asperges of chlorine.