A few weeks ago I reported on a surprise mystical mass-going experience I had recently had. I had an experience where it seemed to me the Holy Spirit was swirling around what I had previously tagged in my mental catalog of parishes as a den of heresy and post-postmodern mediocrity and spiritual dearth. The kind of place which is probably the norm these days and which the poor, longsuffering, half-assed-but-sensible Catholic with even a modicum of a formation in geometry and theology...suffers in order to participate in the glorious but obscured reality of Christ present there. Having set out in a state of skepticism and doubt, I found when I arrived that the place was strangely alive to me. It wasn't just a matter -- as is so often the case -- of suffering the obstacle course of readings from the less-than-wonderful NAB, a bad homily, and emasculated, watery hymns, in order to get to the glorious mystery of the Eucharist... Something was different. The Holy Spirit, maybe, was brooding over the bent world of this little funnel-shaped parish and effecting a change. Or maybe it was the Holy Spirit smacking me -- judgmental, half-assed, lazy sod of a bad Catholic -- upside the head. In any case, Praise be to God. - Rufus of "Korrektiv"

Humor is a gift that Christians should be filled with. You must laugh at yourself so you are able to take your neighbor's faults with a grain of salt. Give him the privilege of being imperfect -- just like you, sweetheart. - Mother Angelica, via Jeff Miller

Drawn by a deep hunger for the Real Presence that I understood even through my Baptist upbringing, I came into the Church with an enormous amount of fundamentalist protestant and secular liberal baggage. If it hadn't been for those who loved me into the Church I could never have completed the journey. I was completely turned off by the attitude of the apologists who thought they knew it all and who were more seemingly more rigid, unbending, and uncaring than the most rigid Calvinist I had ever encountered. This was my judgment on them and it condemned me; however, there were those who did not argue with me, but gently prayed with me and corrected some of my misapprehensions about the Church. We need the strength of reason, of right doctrine, of correct understanding. Those people support the church in reason and in faith. They are probably instrumental in many conversions. But we also need to have those who meet us at the door, broken, dirty, confused as we are; those who show us to seats beside them and who spoon-feed and pray for us as we are gradually healed by the wisdom of the Church, by Love Himself who comes to those of us who are willing. - Steven of "Flos Carmeli"

The American religion is gnostic -- the believer searches for occult experience of his innermost self, standing in aweful solitude with God. It is not ecclesial. "God in you responds to God without," wrote Emerson, America’s sage. It is therapeutic, sold and bought for results, like tooth-whitener. American Protestants, Episcopalians, Catholics and even Jews are spiritually closer to each other than to their global co-religionists. - Richard Major via Terrence Berres

I consider this essay [of Fr. John Dear, SJ] yet another example of the fundamental unseriousness of Catholic pacifism in the United States today. Sophie Scholl's life and witness were given in opposition to Nazism, and it wasn't ordinary acts of nonviolent resistance that brought Nazism down....What did make a difference, what effected the change Sophie Scholl desired, was that ordinary people kept doing extraordinary acts of brutal violence every day even when there was absolutely no evidence of any positive outcome...What I am looking for Catholic pacifism to do to be serious is, in this case, to acknowledge the irony of, or even just the possibility of someone seeing irony in, claiming Sophie Scholl as a success story for nonviolent resistance. - Tom of Disputations

I see it is now the fashion that St. Patrick's Day celebrations receive condemnation as the opportunity for public drunkenness. That's a new one to me. After all who will promote public drunkenness if not for the good organizers of Mardi Gras and St. Patrick's Day celebrations? (I, personally, like to keep any celebratory drunkenness to private venues. So much less evidence to be used against me that way.) - Julie of Happy Catholic, who also passed on this high-laire cartoon from "Inherit the Mirth"

If a beer can be dyed green it is not a real beer. - Curt Jester

There are many good reasons for drinking,
One has just entered my head-
If a man doesn't drink when he's living,
How the hell can he drink when he's dead? - via Summa Mamas

Remember Steve Martin’s old stand up routine from the late 1970s?...The chorus of [his] song included the line “I can’t believe I get paid for doing this.” Sometimes I get the same feeling about being a professional philosopher. - Scott Carson of "An Examined Life"

The fruits of venting and anger seem awfully lame. - via an email 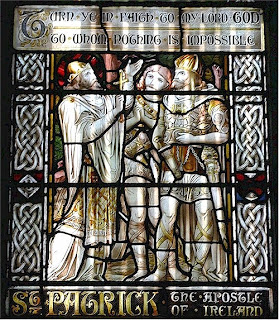 -image via "The Inn at the End of the World"

CEI's Warren Brookes Fellow Jeremy Lott got a new bumper sticker the other day that reads, "Bumper stickers are not the answer." - a NRO "Corner" post
Posted by TS at 1:28 PM