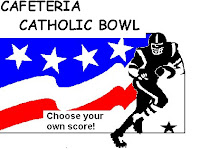 Although the proliferation of college football bowl games has primarily been caused by a thirst for revenue, there are some that actually lose money, such as the famous American Standard Toilet Bowl. Here are a few other very unpopular bowl games: