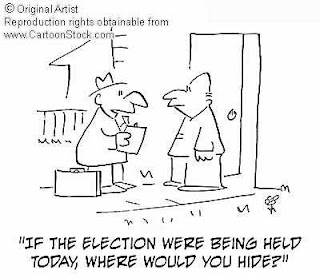 I'm a bit surprised that three months out from Election Day, the networks have already called it in something like 45 states.

The pollsters say it comes down to just a few states "in play" even though I thought no one would dare make any predictions (even on a state level) until, say, after the first debate.

From what I've seen - I think it was Meet the Depress or perhaps This Week for Obama or maybe it was Keith Übermensch - that it all comes down to Ohio (I know you all are tired of Ohioans deciding things and I cain't blame ya), Wisconsin, Michigan, Virginia and possibly Missouri.

This means that the voters who are really deciding things around here include Henry & Roz, Elena, myself, Maureen, TB, Eric, Fred, Ham and I believe Tribal man. I'm sure I've forgotten more than a few. Don't hesitate to lobby us. Free Guinness works for me.

I know I've complained about Ohio's milquetoastiness, but I'm suddenly grateful for that quality since I don't think there's any way Ohio will vote for someone as liberal and inexperienced as Obama. But I could be wrong.

It's interesting that this is the first election in recent memory with the candidates flipped, more or less, on Christianity. Usually a Democrat talking about faith is like nails on chalkboard while the Republican seems to have an easier time of it; this time it's the reverse.
Posted by TS at 2:08 PM