Governed by Emotion, Not Reason?

Inside Catholic has a poll question1 which asks:

Putting aside your own political preferences, who do you think will win the U.S. Presidential election in November?

The audience of Inside Catholic is presumably skewed far to the right. Hence the importance of the "putting aside your own political preferences" disclaimer.

Now what's interesting is that we all go in with the information that McCain has never led in the polls despite a long primary fight between the Democrat candidates. And that it's a heavily Democratic year. And that the national media has swooned over Obama and will paint things to his advantage. (Although there's the possibility of backlash given the low prestige of the media.)

But Inside Catholic readers are unpreturbed. About 52% say McCain will win, about 45% say Obama will: 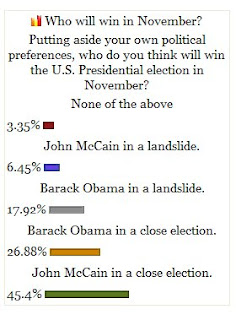 There's no way, obviously, to quantify how many are voting out of emotion and not reason. Certainly some might say Obama out of a native pessimism, just as others might say McCain out of a native optimism. Both are based on emotion.

But the right has the reputation of being more rational than the left2, and so one might expect a 50-50 Obama/McCain split at this point in the race from this crowd. And yet how predictable is it that this poll would skew towards McCain in this forum? It's as predictable as Obama leading on the Huntington Post. And this despite the crucial disclaimer "Leaving aside your own political preferences...".

If the results are disappointing it at least proves we are humans and not robots. And it's always possible that Inside Catholic readers are more politically astute, pending the election results in November.

(This brings to mind a poll in which Democrats and Republicans both errored in their recall of the inflation rate in various presidential administrations (always erroring in their party's favor of course). Republicans errored less, but it still shows the Right certainly doesn't have a lock on rationality. But do we want a bunch of Spocks? Isn't our ability to love somewhat predicated on irrationality by which we see and emphasize the qualities of our family, country and self and missing or downplaying the negatives?)

This interests me in part because my friend Ham o' Bone has a deep faith in rationality combined with a deep faith in his own judgment of what is rational, seeing the two as equivalent. Which we all tend towards, of course, but it gets difficult not only in imagining our own irrationality (think John Nash in "A Beautiful Mind") but in also imagining our neighbor's irrationality. Years ago, when he lost thousands in stock options, Ham said this was the fault of the market and that it points to the prevalence of ignorance bad opinion. I say this not to be critical, as I fiercely admire Ham's confidence because that's how so many wonderful inventions and businesses came to be. But either he was directly wrong, or he had failed to account for the irrationality of others. It happens.

Or, as a liberal famously said after Nixon beat McGovern, "Nixon couldn't have won - I don't even know anyone who voted for Nixon!"

Of course, all of this assumes voting is a rational process when actually it's mostly a crapshoot and always the choice of the lesser of two evils given that we are all flawed human beings. The crapshoot nature is illustrated in recent history by the fact that our best president was a former actor and the one with the most experience (LBJ) was a complete dud.
_____

2- i.e. someone on the left, Chris Matthews, refers to the Republicans as the "Daddy" party and the Democrats as the "Mommy" party. (This was before the Republicans became spendaholics during recent years.) The parties often separate between head versus heart, though with notable exceptions like protecting the unborn.
Posted by TS at 7:01 AM