So It's Really Not the Heat After All...

It is the humidity. And the lack thereof yesterday was a fine accompaniment for a bike ride. 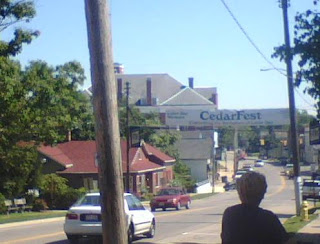 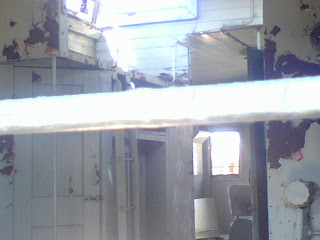 Inside a rusty caboose at "Caboose Graveyard"
Yesterday there was wall-to-wall sun despite ten days of errant forecasts, and weather wasn't the only bad 'cast. Mark, our fellow rider, had forecasted a flat bike course and my mother's super-duper slope detector went off like the bells and whistles of a Vegas jackpot. There was an slight upgrade for the first few miles and while we consoled ourselves that this meant we'd be going downhill at the end, with bike rides, like life, the downhills are less appreciated than the uphills bemoaned.

Weather forecasts are normally about as accurate as Chinese fortune cookies, yet we fall for them every time. In this weathermen and my friendly neighbor are alike since with both you think THIS time it will be different. This time she'll have a real emergency or this time it'll rain. With my neighbor the latest 5-call fire alarm WAS an emergency of the nasal sort (she being nosy). She wanted to know what happened to my car. I was happy to oblige her with the news that it was at the shop being worked on.

We started at Xenia, a town whose water tower states that it's "the bicycle hub of the world," only I got that wrong, noting on the trip back that it actually said - more modestly - "bicycle hub of the Midwest". No false braggadocio there, a very Midwestern trait.

We shared the path with more butterflies than one would've thought lived in all the Midwest, and some of the little yellow ones were named "Sulpher", which seemed a bit fire and brimstone-ish for such a fine flier. Our midway point was the homespun metropolis of Cedarville, a clean little town with friendly librarians who must be accustomed to bikers using their facilities. On the very outskirts of the business district we found a Mom & Pop dairy shop called "Mom and Pop Dairy". We had the delicious sundaes in a tiny place festooned with bumper stickers like "Read the Bible" on the walls. There's something special and cozy about small towns.

We continued the ride despite the croaking protestations of Mom's bike, which was functional but had some sort of complaint that oil didn't address. We soon came to the famous "Caboose Graveyard," a term Mark made up on the fly to describe the collection of rusting train cars found along the route. Before sighting it, it was thought Mark referred to an actual graveyard starring a Mr. Caboose, but the alternative seemed no less interesting. He hopped up and read something inside one of the cabs, nicely printed: "If you are smart enough to be able to read this, then you best get the f--- out of here". Something like that.
Posted by TS at 1:21 PM