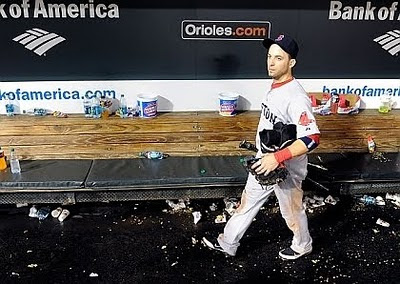 Hyp-mo-tized by the sweeping, self-demolition of the Red Sox over the past couple weeks, with the denouement coming last night. The neatness of the Sox demise reminds one of a planned implosion. First there was the sheer, unmitigated surprise of Tampa Bay coming back from a 7-0 deficit (proving the existence of God for Rays fans) and then nearly simultaneously the Sox lose a one-run lead late in the game (proving the existence of the devil for Bosox'rs). It all has that olde-timey Red Sox-y '86 feel to it. But they have '04 and '07 so you can't feel too sorry for them. Pity the poor Cubs.

Speaking of the Sox, good link from the Anchoress:

“For the love of God . . .” he cried, again and again, as one Bosox batter after another swung and missed, and looming before him was a ninth inning full of Mariano Rivera at his peak.

Watching at home, my son and I heard a hated rival’s naked pain, and we hooted in what might be called cruel appreciation.

Baseball fans understand each other’s afflictions. We could laugh in that moment, because our team was winning, but we recognized all too well the sound of anguish emanating from Beantown; we had felt it enough, in the Bronx. When the umpire called “strike three” at the third out, the single voice dissolved into a bellow of incoherent angst and three hundred miles away we knew the man had slumped into his chair with his head in his hand, and his heart full of hate; not for the Yankees—that was a given—but for his own team, and for the game of baseball, itself, of which the late commissioner A. Bartlett Giammati once wrote, “it breaks your heart. It is designed to break your heart.”

The heartbreak is what makes it great, and the source of the heartbreak is the clutch—that period of time (and it can last for a moment or for years) when everything meaningful in your life fades into a peripheral nothingness until an outcome is known. In the clutch, love is balancing—one foot, en pointe—along a thin wire of hope, and still determining if, or when, the next foot might be safely employed.

The virtual home of the Anchoress is at Patheos, and I heard Mark Shea is pitching his tent there as well (the cohabitation is strictly platonic). This era of blogs feels like the '90s business era of mergers and acquisitions; it all feels vaguely unsavory, a corporatization of the blogger model of the individual voice crying out freely in the wilderness. But hey, that's capitalism. 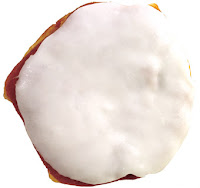 Relished I a white-topped donut, sitting like a Rocky Mountain on the plain of breakfast goodies this morning. (How's that for some bad writing?) It felt deserved (the donut, not the bad writing) after yesterday's slight dislocations and discombobulations. There was the shift at the food bank and then wrestling at home with a new DVR, the old one having been kaput for the last week and the new one not working either. After two reboots I called the help line, and they had me do an unplug, which (surprisingly) worked. The DVR restoration seemed to give the house a sense of order it was heretofore lacking. Too. dependent. on. technology.

(Speaking of videos, I'm sorely tempted to get the new Fr. Robert Barron series on Catholicism. Expensive, but eye-candy for the Catholic eye: plenty of mosaics and churches and Holy Land images. Or so I hear.)

While working on the DVR, I listened to Lino Rulli in the background and he said the things I've often thought, including the plain-spoken "I hate free will." He said he wants it to be easy. "Why couldn't God just make us perfect and then be done with it?" It's a familiar angst indeed and it was pretty cool to hear it expressed aloud.

Read some of "The Bible Made Impossible" which argues against the Bible being a "handbook" or "owner's manual". The author makes the case that there is plenty of biblical data on both sides of many controversial questions, hence divisions in the Bible Alone crowd are inevitable. The Civil War is proof; both sides felt they had the Bible on their side.
Posted by TS at 10:20 AM

This era of blogs feels like the '90s business era of mergers and acquisitions; it all feels vaguely unsavory, a corporatization of the blogger model of the individual voice crying out freely in the wilderness.

That's why I only read locally sourced, artisanal blogs.

Ha, I took a drink of coffee before reading your comment and guffaw'd the drink all over myself. Will send you the dry-cleaning bill!

Yes, The Sox choked, the Rays might go up 2-0 yada yada yada. But it's all a moot point isn't it? The Phillies are not going to be stopped this year.