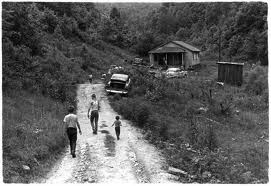 ...comment found on a blog about the (endless) poverty of Appalachia:

Then there are the post-industrial areas of Appalachia. I understand these areas because that's where I grew up. My family bought land in Lawrence County over 220 years ago, and there are seven generations buried there.

But you know what, most of those in my generation have left for better opportunities. Just as our ancestors left their relatively safe homes in the East to seek a better life in what was then the Northwest Territory (encouraged by the land grants they received for service in the Revolutionary War), we need to encourage the folks in these post-industrial areas to move on and make a life where there are better employment opportunities. Whatever the unemployment might be here in central Ohio at any given time, it's about 4x higher in Appalachia, and I don't see it getting any better - ever.

It's hard to say we shouldn't underwrite the Appalachian schools, because it's not the kids that are making the choice to stay. But there are some school districts down there who pay only 10% of the cost of running their schools - the rest is State and Federal funding. We have to, with compassion, encourage those folks to honor the memories of our pioneering ancestors, and move on to greener pastures.

That's what I think anyway.

Given the tenuous economic status of the rust belt, perhaps some day the whole of Ohio will be in that category, making it necessary to move to the South or West. What interests me is this tension between living where you have roots, versus the necessity of going to where the jobs are. Culture versus economics. The commenter deftly implied that tradition for the Appalachians is pioneering, not staying put.
Posted by TS at 11:33 AM