A Tale of Two Interpretations 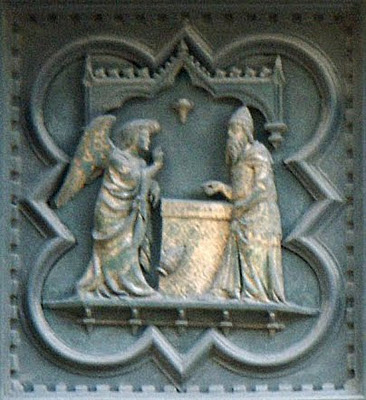 Interesting to hear the differing takes of two priests at the downtown Dominican parish concerning the visits of the angel to Mary at the Annunciation and the visit to Zechariah. (And given, of course, on different days.) One priest said that the reactions of Mary and Zechariah were similar, so why the difference? Because the difference in condition. Mary was treated differently, he argues, because she *was* different - she was conceived without sin and had no original or other sin on her soul. This is one of the biblical clues we have that Mary was uniquely created.

The other priest there said that there was a difference in response and intention: Mary was asking - purely as a practical matter - how this could happen (i.e. give birth without losing her virginity), while with Zechariah, it was obvious how it would come about and it wasn't something that hadn't already happened before in salvation history (see Abraham and Sarah). Plus the priest said Zechariah's tone was different, which doesn't come through in the English so well but was more of a more scoffing attitude.

The first priest's interpretation seems to favor one of predestination. His homilies are big on praising God and not looking at ourselves so much, not trying to take credit for any improvements or become discouraged with lack thereof. The second priest's emphasizes human response and tends to emphasize our role in salvation. So in retrospect it's no wonder that they look at the same biblical story in different ways.

UPDATE: The Friar Minor has worthwhile thoughts on the same subject.
Posted by TS at 8:57 AM