'Twas alarming to read of St. Antony, whose memorial we celebrated yesterday, getting beat up by the devil (just like St. Padre Pio). It reminds me so much of the homily the other day at St. Patrick's where the priest said that we should expect not simply to be on the offensive against the devil, driving him back and such, but also be able to take a punch, to absorb a blow. Just an amazing coincidence, or Godincidence it seems. What are the odds that I would read about the devil beating a saint up* and then hearing a homily, totally unrelated to the story of that saint, bring up the necessity of Christians to absorb the devil's blows? 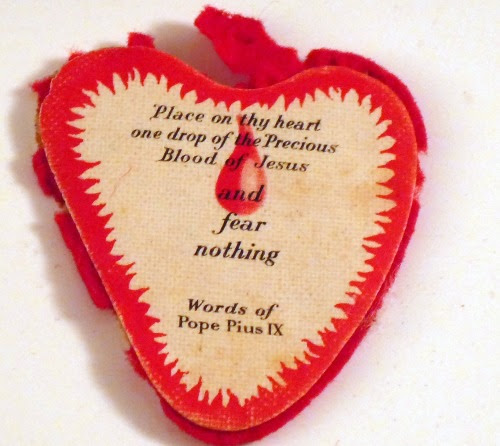 Jesus famously provided the example in taking the worst the devil has to offer in the form of suffering and death, and be able to come out the other side victorious. Death vanquished by death. The priest said it was like how in boxing it's not just how well you can punch but how well you can absorb punishment.

It got me thinking how odd it would be if Pope Benedict suddenly appeared all bruised up by the devil. Hard time explaining that to the media one would think.

Reading about St. Antony, we see him ask the Lord, after enduring torture from the Devil, “What took you so long?” (to bring relief). And God basically said “I was there the whole time and you will be rewarded for your endurance.” Kind of a non-satisfying answer - I was perhaps hoping for “you didn't ask for help!”. But St. Antony loved the response. Which is the way it seems to work - saints are very satisfied and edified by the responses of God. The prime example of this is Job in the Old Testament who receives the answer in a whirlwind, an answer very compelling to him. I take comfort in the fact that there IS a highly satisfying response, even if it's not particularly satisfying to me. Perhaps it's not important that I feel that relief until it's required or until this earthly trial is over.

*
Always fascinating to see a fight among the good Catholics on the 'net, in this case in a response to a column reputed to be a bit too relaxed on matters sexual. What really interested me was the guy's anti-Pelagian recognition that goodness and virtue comes from outside ourselves.

A padre disses the author but does touch on that mysterious realm of free will versus grace with this:


“Actually, Christian virtue is something “gotten directly,” by freely encountering the person of Christ through the means He Himself instituted in the Church. Virtue is something that Christ works in us without us. However, because it can only involve our freedom, as persons created in God’s image, it involves everything: knowledge, choice, love, affection, discipline, mortification, fear, desire—all of it. This is the mystery of grace and free will that has kept theologians and mystics busy for centuries.

Virtue is a habit that can only be formed by continuous pressure against the bad habit. That pressure is not simply negative energy. But neither is it mostly positive thinking. This being said, even the supernatural virtue of chastity is not of itself sufficient. That is why there are the Gifts of the Holy Spirit, whose effects are simply beyond anything that can be achieved by education, positive, nor negative, or by discipline.”

Pope Benedict also touched on this mystery in his recent book on Jesus, offering: "Grace and freedom are thoroughly interwoven, and we cannot unravel their interrelatedness into clear formulae."

*
And Eliz Duffy scores with a thought-provoking reflection on things:


“Maybe it’s something to do with the 2012 election, and Drudge-style media paranoia, but I’m just tired of skepticism, and conspiracies, and default positions that everyone in the world is trying to do me wrong. I wanted to go into labor trusting that I was in competent hands. I was in a new hospital with a new doctor, so it took a little leap of faith. Nothing about it was familiar. But I’ve been thinking a lot lately, in a lot of different situations, that ignorance can be a mercy.

I realize that’s not a popular position–no one wants to be taken by surprise, say, by the end of the world, by aggressive government policies, by cut-hungry OBs. But it was nice to go through Advent and the nativity right before delivery, thinking about how God entrusted himself in complete powerlessness to human caregivers. Why would God, who knows how wrong people can be, choose this kind of voluntary impotence?

My friend Pedge was telling me about a Fulton Sheen quote, in which people who have lost their fear of God tend to redirect their fears onto imaginary human assailants. There must always be an antagonist, whether it’s doctors or politicians or people who think or look differently. It’s so easy to consider oneself a potential victim, when what really motivates fear is an excess love of self....

To tell you the truth, I’m still trying to figure out what “Fear of God” is. But I think it has something to do with awe of Creation, and recognizing that everything that happens in it, including suffering, is God’s providence. 'Some people call pleasant things ‘providential.’ Mary and Joseph thought everything was. God is in everything and every place. Nothing is without God.”–Father Peyton's rosary book...

I’m trying to figure out if humility means entrusting oneself to the people and times with whom and in which I live...

'It is not life and its difficulties you have to conquer, only the self in you.' (From 365 One-Minute Meditations: God Calling edited by A.J. Russell.)"

St. Antony, from a life of the saint:

"...in hideous shapes of the most frightful wild beasts, which they assumed to dismay and terrify him; till a ray of heavenly light breaking in upon him, chased them away, and caused him to cry out: “Where was thou, my Lord and my Master? Why wast thou not here, from the beginning of my conflict, to assuage my pains!” A voice answered: “Antony, I was here the whole time; I stood by thee, and beheld thy combat: and because thou hast manfully withstood thine enemies, I will always protect thee, and will render thy name famous throughout the earth.” At these words the saint arose, much cheered, and strengthened, to pray and return thanks to his deliverer."