Was greatly moved by Cardinal Dolan mentioning the other day how the love God has for us is so intense it personifies into our guardian angel. Similar theologically to the idea that the love between the Father and the Son was so intense it became a person, the Holy Spirit. 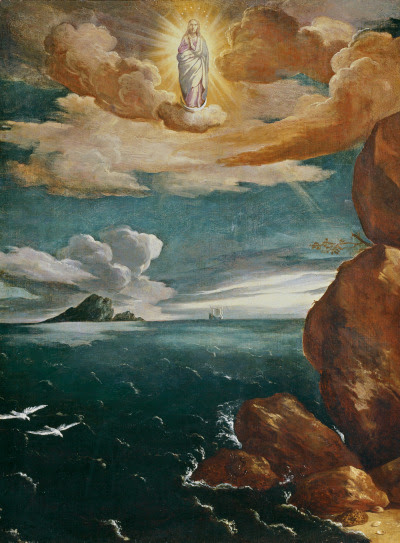 Homilist said how we don't want to give merely seeds back to Christ at the end of our lives, we want to have taken his seed and allowed it to flourish into the greatest of trees, much like the parable of the mustard seed. So how do we accomplish this? He said not by human will power. I assumed he'd say by allowing God's grace to work within us but he made a piquant point: by repentance. Continual repentance. Perhaps the secret to everything is not so much obedience, as I'd previously thought, but repentance, the same message of John the Baptist and Jesus: “repent and be baptized!”

Pope Francis recently mentioned the Ascension. Bodily leaving is hard to take. (The Catechism mentioned that the Eucharist was a gift to the Church as a visible sacrifice, "as the nature of man demands".)

But you can't say that Christianity hasn't thrived post-Ascension. In fact it's precisely then that it took off and had “wings” as it were. Christ's gift of the Spirit was a huge rocket-launcher that resulted in countless deeds of mercy and professions of faith. We can see the truth of Our Lord's statement that those after Him will do mightier deeds, given the subsequent converting of nations and empires. And on a micro level it works: can anyone say that St. Francis or St. Therese would've be holier if Christ had been bodily present on earth?  The witness of the saints tells us what Christ Himself did, that we have Him with us now and that He is powerfully present.

Sometimes stories about saintly people, like Pope Francis, drive me into the deepest dungeons of despair. Read something today that really discouraged me. It was an anecdote whereby the then Archbishop had to catch a train in order to be at a conference of some sort. Bergoglio had a few moments, so he stepped in a church and prayed a bit. Just as he was leaving he was accosted by a young man who looked to be drunk or on drugs. The man said, “Will you hear my confession?” Francis said, accurately, that another priest would be there soon. But then a few steps later he felt a deep sense of remorse and returned to the man and said that he would hear his confession. Which he did, and the train turned out to be late which obviously was literally providential. But the coup de grace of this story is that after that night at the conference he headed not back home but to his confessor because he knew he could not “celebrate mass the next day unless he received forgiveness.”

Yikes. This is the sort of thing that makes me despair. The pope's goodness (and scrupulosity?) seem otherworldly compared to my attitude which imbued with far too much of “personal responsibility”. I've gone to Mass with much worse “sins” (if you can call his that) than the archbishop's.

Kind of interesting to come across a Catechism entry that describes the altar as the body of Christ:

I googled and found the following:


…the early Church identified the altar as representing both Christ and the Church. “Christ, Head and Teacher, is the true altar,” it says; therefore, the members of the Body of Christ and his disciples “are also spiritual altars on which the sacrifice of a holy life is offered to God”. The members of the Church “are the living stones out of which the Lord Jesus builds the Church's altar” (ibid.). “The Church's writers have seen in the altar a sign of Christ himself. This is the basis for the saying: 'The altar is Christ'” (4). Like Christians at their initiation, the altar is dedicated by being anointed with chrism, honored with incense, clothed in white, and illumined with candles (22) – all symbols of Christ's presence.

It should look like the place “on which the Sacrifice of the Cross is made present under sacramental signs [and] the table of the Lord to which the people of God is called together to participate in the Mass, as well as the center of the thanksgiving that is accomplished through the Eucharist” (GIRM, 296). In the past, those directions have led architects to design altars that look like tombs and that, in fact, sometimes have contained the bodies of saints. (And some tombs were then built to resemble altars.)

Speaking of the Catechism, lines you don't expect to read in it: “Put my body anywhere!" said St. Monica, asking only that her son pray for her after her death.

Benedict's Jesus on Holy Week is awfully rich. A rich broth; there's no wasted motion in any of the former pope's paragraphs. Again I find myself in highlighter heaven:


It has been argued that the new element—moving beyond the earlier commandment to love one’s neighbor—is revealed in the saying “love as I have loved you”, in other words, loving to the point of readiness to lay down one’s life for the other. If this were the specific and exclusive content of the “new commandment”, then Christianity could after all be defined as a form of extreme moral effort. This is how many commentators explain the Sermon on the Mount: in contrast to the old way of the Ten Commandments—the way of the average man, one might say—Christianity, through the Sermon on the Mount, opens up the high way that is radical in its demands, revealing a new level of humanity to which men can aspire.

And yet who could possibly claim to have risen above the “average” way of the Ten Commandments, to have left them behind as self-evident, so to speak, and now to walk along the exalted paths of the “new law”? No, the newness of the new commandment cannot consist in the highest moral attainment. Here, too, the essential point is not the call to supreme achievement, but the new foundation of being that is given to us. The newness can come only from the gift of being-with and being-in Christ.

Saint Augustine actually began his exegesis of the Sermon on the Mount—his first cycle of homilies after priestly ordination—with the idea of a higher ethos, loftier and purer norms. But in the course of the homilies, the center of gravity shifts more and more. In a number of places he has to acknowledge that the older morality was already marked by a genuine completeness. With increasing clarity, preparation of the heart comes to replace the idea of the higher demand; the “pure heart” (cf. Mt 5:8) becomes more and more the focus of the exegesis.

Very interesting blog entry. I'd like to share it on my Facebook. I came upon your blog looking at stats for my website & the Official Roma Downey Pages (A site I created and maintain for Roma for many years) and it showed that people were referred to my personal pages or Roma's site from your blog. Although I can't tell from what link or how. Peace.

Thanks Anna, appreciate the feedback. Not sure if I've linked to your Roma Downey pages before or not. Tried to do a find on my site but web browser isn't cooperating. God bless!